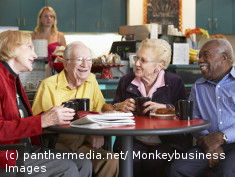 The study evidence highlighted that even 'subtle differences' in the way people behave toward older people could be enough to make them underperform when others are testing their abilities; © panthermedia.net/ Monkeybusiness Images

The most comprehensive analysis to date of research on the effect of negative stereotypes on older people's abilities has concluded that these stereotypes create a significant problem for that demographic.

A research team at the University of Kent's School of Psychology carried out a review and meta-analysis of Aged-Based Stereotype Threat (ABST).

They statistically analysed international evidence from 37 research studies, both published and unpublished. They concluded that older adults' memory and cognitive performance is negatively affected in situations that signal or remind them of negative age stereotypes. These effects affect both men and women.

The research, funded by the Economic and Social Research council (ESRC), was carried out by Ruth Lamont, working with Dr Hannah Swift and Professor Dominic Abrams. It further found that older people's cognitive performance suffers more when the threat is induced by stereotypes rather than by facts.

The meta-analysis showed that even a hint that performance was being pre-judged because of age criteria was enough to affect older people's performance.

Ruth Lamont said that the study evidence highlighted that even 'subtle differences' in the way people behave toward older people - such as being patronising or speaking slowly - could be enough to make them underperform when others are testing their abilities, either formally or informally.

Researchers have previously concluded that stereotype threat affects the major social categories of gender and ethnicity, but this new meta-analysis, which looked at evidence from over a decade of research, highlights the need to be just as concerned about age stereotypes, Ruth Lamont suggested.

The research team further conclude that the vulnerability of some older adults to ABST when they perform memory, cognitive or physical tasks has important social, economic and clinical implications which will become more relevant given an increasingly aging population and workforce.

More about the University of Kent at: www.kent.ac.uk