How stroke survivors could benefit from computer games 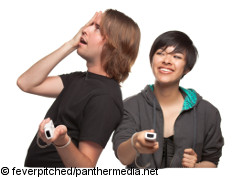 A preliminary study showed that playing specially adapted games improved the arm movements of stroke patients, with a threefold increase in their ability to pick up and put pegs in holes. One stroke survivor was even able to lift and drain a cooking pan for the first time since her stroke 11 years before and her hand "wanted to open of its own accord."

There are an estimated 110,000 new strokes in the UK each year, costing more than £2.8billion, and over a third who survive are left with a long term disability. Seven out of ten suffer from arm weakness as a result, with no more than a fifth of these ever regaining the full use of their arm.

Emmanuel Tsekleves of Lancaster University said: "The innovative use of the Nintendo Wii could present a way to enhance community based stroke rehabilitation of the arm by providing a motivating and cost-effective way of exercising that could be remotely monitored and exercises adjusted as required by a physiotherapist."

Participants took part in three trials using the Wii as a way of improving their arm movements after stroke. They had to imitate a 3D avatar on screen following movement patterns for the shoulder, elbow and forearm. They also had to play games that included hitting randomly appearing balls and playing air hockey on screen.

One said: "I can now play games and do things not possible for me before," while another said: "It’s great! I can see my arm movement appear instantly on screen and can tell how well and far I have gone."

Each patient’s movements were recorded, and the physiotherapist could remotely monitor progress and give advice as well as customise the game in terms of movement, speed, duration, scoring and feedback.

There are now plans to extend the trial.

More about the Lancaster University at: www.lancs.ac.uk