How the Elderly Find their Ways 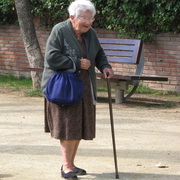 The research project “Older People's Use of Unfamiliar Space” examined the strategies used by older people to find their way in unfamiliar spaces as pedestrians and users of public transport.

As part of the research, older people were shown town scenes and pedestrian routes and gave feedback on signposting, ease of navigation and general impressions. Their heart rates were measured to monitor stress levels. Participants were also taken to a town centre to walk through the same routes in person.

Initial findings show: Signs are of limited use even in unfamiliar new areas – they were often positioned incorrectly or too high, and without indicating the distance to the destination. Designing outdoor spaces that are more easily navigable and walkable are also important in making the environment less stressful and anxiety-inducing. Buildings and landmarks are particularly important as navigational aids, especially churches.

The research project also conducted interviews with spatial planners to examine how older people were included in the planning process. The responses indicated that older people are being increasingly engaged, not least through the Equality Impact Assessment where older people are represented as an important group. Planners considered that older people today have greater political awareness and power and were able to collaborate with the process.

Efforts are currently made to make public spaces 'older person-friendly' as part of lifetime places guidelines – for instance the location and number of bus shelters, seating and public toilets. Older people's needs are also considered in relation to housing issues, such as location, neighbourhood considerations and land use requirements for special housing, and mechanisms to encourage older people to downsize.

However, the diversity of older people and their different needs are not fully recognised. Planning focus has tended to be on combating particular issues such as youth crime and problem drinking, or the mobility needs of elderly people. There is still a need to understand older people's various requirements in their use of space, reflecting their diversity and different backgrounds.

While some are experienced travellers who are used to finding their way in unfamiliar spaces, others may suffer cognitive impairment which makes previously familiar areas unrecognisable and means they need different cues in their environment. Treating 'age' as a single category can therefore be unhelpful for planners in designing urban spaces, concludes the research.

"Older people are increasingly experiencing unfamiliar places through travel. Creating spaces that make the urban environment more friendly and pleasant will be ever more important to enable older people to remain independent," comments lead researcher Judith Phillips. "The findings have significance for planners in redesigning town centres, allowing them to develop inclusive environments that have meaning for older people."


- More about the Economic & Social Research Council at www.esrc.ac.uk