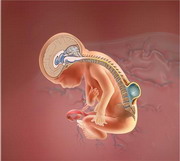 Performing delicate surgery in the womb, months before birth, can substantially improve outcomes for children with a common, disabling birth defect of the spine.

Experts at The Children’s Hospital of Philadelphia (CHOP) co-led a new landmark study showing that fetal surgery for spina bifida greatly reduces the need to divert fluid from the brain, improves mobility and improves the chances that a child will be able to walk independently.

Spina bifida is the most common birth defect of the central nervous system, affecting about 1,500 babies born each year in the United States.

“This is the first time in history that we can offer real hope to parents who receive a prenatal diagnosis of spina bifida,” said Doctor N. Scott Adzick, Surgeon-in-Chief at The Children’s Hospital of Philadelphia, director of Children’s Hospital’s Center for Fetal Diagnosis and Treatment, and lead author of a federally sponsored study reporting results of a clinical trial of fetal surgery for myelomeningocele, the most severe form of spina bifida. Adzick added, “This is not a cure, but this trial demonstrates scientifically that we can now offer fetal surgery as a standard of care for spina bifida.”

Myelomeningocele is devastating, occurring when part of the spinal column does not close around the spinal cord, failing to protect it during stages of fetal development. Long-term survivors of the condition frequently suffer lifelong disabilities, including paralysis, bladder and bowel problems, hydrocephalus (excessive fluid pressure in the brain), and cognitive impairments.

Fetal surgery researchers have now reported long-awaited results from an unprecedented clinical trial that compared outcomes of prenatal, or fetal, surgery versus postnatal surgery, the conventional surgery for this disabling neurological condition.

The MOMS study was a prospective, randomized clinical trial. One sign of its prominence is that all U.S. fetal surgery centers not participating in the trial agreed to perform no fetal surgery for spina bifida during the 7-year duration of the trial. The trial goal was to enroll 200 patients, but the NIH ended the trial in December 2010, after 183 surgeries had occurred, based on clear evidence of efficacy for the prenatal procedure.

Throughout the trial, women whose fetuses had been diagnosed with spina bifida contacted the trial’s coordinating center at GWU if they chose to volunteer for the study.

Postnatal surgery entailed delivery by planned cesarean section at 37 weeks gestation, after which the surgical team repaired the opening in the newborn’s spine, usually within 24 hours after birth. In prenatal surgery, done between 19 and 26 weeks’ gestation, the surgical team made incisions in the mother and her uterus, then repaired the spina bifida lesion while the fetus was in the womb. Mothers in this group stayed near the center for ongoing monitoring, then underwent delivery by planned cesarean section at 37 weeks, or earlier, because many of the babies in the prenatal surgery group arrived prematurely.

The complex requirements of this fetal surgery require a highly sophisticated multidisciplinary team. In both study groups, surgeons used the same technique to cover the myelomeningocele with multiple layers of the fetus’s own tissue.

“This lesion leaves the spinal cord exposed, so it’s essential to protect this tissue from neurological injury,” said study co-author Doctor Leslie N. Sutton, Chief of Neurosurgery at The Children’s Hospital of Philadelphia. Previous research had established that in myelomeningocele, amniotic fluid and other features of the intrauterine environment damage the exposed spinal cord.

The abnormal spinal development underlying myelomeningocele triggers a cascade of disabling consequences, including weakness or paralysis below the level of the defect on the spinal column. In addition, leakage of cerebrospinal fluid through the open spina bifida defect results in herniation of the brainstem down into the spinal canal in the neck—a condition called hindbrain herniation. Hindbrain herniation obstructs the flow of cerebrospinal fluid within the brain, leading to hydrocephalus, a life-threatening buildup of fluid that can injure the developing brain. Surgeons must implant a shunt, a hollow tube that drains fluid from the brain into the child’s abdominal cavity. However, shunts may become infected or blocked, often requiring a series of replacements over a patient’s lifetime.

The current study reports data on 158 patients who were followed at least one year after surgery. Clinicians who were independent of the surgical teams and blinded (not informed which of the two surgeries a given child received) evaluated the children from the study at one year of age and again at age 30 months.

- As with any surgery, fetal surgery carries risks. Fetal surgery in this study raised the risk of premature birth and scarring in the mother’s uterus. “Additionally, the surgical site in the uterus used for fetal surgery requires that the mother will have to undergo a cesarean section for any subsequent births,” said Doctor Mark P. Johnson, obstetrics director at the Center for Fetal Diagnosis and Treatment (CFDT).

Although the trial results mark a milestone in spina bifida treatment, not every woman carrying a fetus with spina bifida may be a suitable candidate for fetal surgery. For example, severely obese women were not included in the current study because they have a higher risk of surgical complications. Adzick noted that further research will continue to refine surgical techniques and improve methods to reduce the risks to mothers and fetuses.

In the meantime, concluded Adzick, “Both the experimental outcomes of animal studies and the results of the MOMS trial suggest that prenatal surgery for myelomeningocele stops the exposure of the developing spinal cord to amniotic fluid and thereby averts further neurological damage in utero. In addition, by stopping the leak of cerebrospinal fluid from the myelomeningocele defect, prenatal surgery reverses hindbrain herniation in utero. We believe this in turn mitigates the development of hydrocephalus and the need for shunting after birth.”


- More about the Children's Hospital of Philadelphia at: www.chop.edu