'I can hear a building over there' 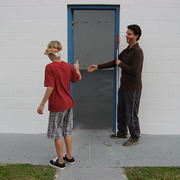 Daniel Kish (r.) wants to learn about
how blind people can echolocate;
© Western

It is common knowledge that bats and dolphins echolocate, emitting bursts of sounds and then listening to the echoes that bounce back to detect objects. What is less well-known is that people can echolocate too.

In fact, there are blind people who have learned to make clicks with their mouths and to use the returning echoes from those clicks to sense their surroundings. Some of these individuals are so adept at echolocation that they can use this skill to navigate unknown environments, and participate in activities such as mountain biking and basketball.

Researchers at The University of Western Ontario's Centre for Brain and Mind have recently shown that blind echolocation experts use what is normally the 'visual' part of their brain to process the clicks and echoes.

Senior author Mel Goodale, Canada Research Chair in Visual Neuroscience, and Director of the Centre for Brain and Mind, says, "It is clear echolocation enables blind people to do things otherwise thought to be impossible without vision and can provide blind and visually-impaired people with a high degree of independence."

Goodale and his team of researchers first made recordings of the clicks and their very faint echoes using tiny microphones in the ears of the blind echolocators as they stood outside and tried to identify different objects such as a car, a flag pole, and a tree. The researchers then played the recorded sounds back to the echolocators while their brain activity was being measured in Western's state-of-the-art 3T functional magnetic resonance imaging (fMRI) brain scanner.

Remarkably, when the echolocation recordings were played back to the blind experts, not only did they perceive the objects based on the echoes, but they also showed activity in those areas of their brain that normally process visual information in sighted people.

When the same experiment was carried out with sighted control people who did not echolocate, these individuals could not perceive the objects, and neither did their brain show any echo-related activity, suggesting visual brain areas play an important role for echolocation in blind people.

According to Goodale, this research will provide a deeper understanding of brain function, particularly how the senses are processed and what happens neurologically when one sense is lost.


- For a feature story of Daniel Kish, one of the participants in the study, click here
- More about the University of Western Ontario at: www.uwo.ca