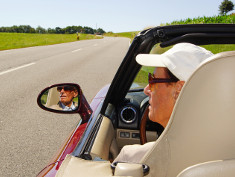 Parkinson patients are only allowed to drive the car when the therapy was successful or in mild cases of the disease; © R. Berold/panthermedia.net

"Up until now, we weren't sure how deep brain stimulation would affect driving," said study author Carsten Buhmann, of University Medical Center Hamburg-Eppendorf in Hamburg, Germany. "On the one hand, it might enhance driving ability by improving the motor problems which occur with Parkinson's disease, but on the other hand, it might hamper driving because it potentially causes a decline in executive cognitive skills."