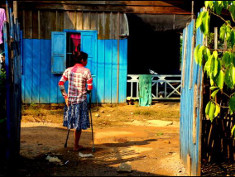 On his journey Dennis Klein had to learn that sometimes luck and misery lie closely together; © Dennis Klein

16 countries, 16 projects, 20 life stories of people who live with a disability. Dennis Klein traveled around the world on the trail of the UN convention. He focused a critical view on inclusion and human rights in the whole world. On his journey which lasted one year, he met many people whose human dignity neither was affronted by the state nor was considered by the citizens. During the REHACARE 2014 Dennis Klein will present his documentary film "Despite everything being Human" in which he gives a voice to people with disability.

Dennis Klein, originally second school teacher, does voluntary work in curative education and accompanies inclusive free time journeys for children and teenagers. About the intention of the project "Include the excluded" Klein says that he wants to meet people who have to fight for their right of peace, liberty and justice with all their kinds of impairment. The documentation shall offer the possibilities "to raise their voice and to report about their experiences". Klein especially glances at the policy for disabled people in the countries themselves. The question in focus is "whether the ratified UN convention has a noticeably positive effect on affected persons or not". Consciously Klein wakes up for the necessity of development and activates for social discussion. He does not hesitate to show controversial pictures.

Inconceivable pictures expected Klein on his world tour. Affected people were locked and isolated from society and family. They were left alone half starved in their beds. Children were shackled on bed frames. Their bodies were fixed with handcuffs and ropes on iron railings. Some of them had never seen the sun and never felt the rain on their skin.

In "Despite everything being Human" (dt. "Trotz allem Mensch sein") Dennis Klein foregrounds those people who are not allowed or who are not able to put forward their claims: "All of us have the same need for a life in liberty. All of us want to live self-determined. Independent of social parameter, independent of physical barriers and institutional discrimination we all want the same: Despite everything being Human."

For the first time Dennis Klein will introduce his film during the new REHACARE Forum. The presentation takes place on 27th of September 2014.