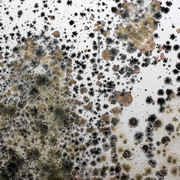 Exposure to certain molds during
infancy may have a direct link to
childhood asthma development;
© panthermedia.net/R. Rebmann

In the United States, one in 10 children suffers from asthma. Researchers of the University of Cincinnati now report new evidence that exposure to three types of mold during infancy may have a direct link to asthma development during childhood.

These forms of mold — Aspergillus ochraceus, Aspergillus unguis and Penicillium variabile — are typically found growing in water-damaged homes, putting a spotlight on the importance of mold remediation for public health.

In a long-term population study of nearly 300 infants, researchers from the University of Cincinnati (UC), U.S. Environmental Protection Agency (EPA) and Cincinnati Children’s Hospital Medical Center assessed allergy development and the respiratory health of children annually for the first four years of life then again at age 7— an early age for objective diagnosis of asthma in children. The team also monitored home allergens and mold. All infants enrolled in the study were born to at least one parent with allergies.

They found that 25 percent of children whose parents had allergies were asthmatic by age 7. Among the multiple indoor contaminants assessed, only mold exposure during infancy emerged as a risk factor for asthma at age 7.

"Previous scientific studies have linked mold to worsening asthma symptoms, but the relevant mold species and their concentrations were unknown, making it difficult for public health officials to develop tools to effectively address the underlying source of the problem,” explains Doctor Tiina Reponen.

The UC-based team used the environmental relative moldiness index (ERMI), a DNA-based mold level analysis tool, to determine that exposure to Aspergillus ochraceus, Aspergillus unguis and Penicillium variabile was linked to asthma development in the high-risk study population. The ERMI tool was developed by the EPA to combine analysis results of 36 different types of mold into one index that describes a home’s cumulative mold burden.

"This is strong evidence that indoor mold contributed to asthma development and this stresses the urgent need for remediating water damage in homes, particularly in lower income, urban areas where this is a common issue,” says Reponen. "Therapeutics for asthma may be more efficient if targeted toward specific mold species.”


- More about the University of Cincinnati (UC) at: www.uc.edu