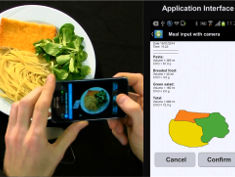 The app can be a helpful tool for people with diabetes; © Stavroula Mougiakakou/Uni Bern, ARTORG Center

An app for smartphones automatically calculates the carbohydrate content of a meal. The programme called “GoCARB” enables diabetics to better plan their meals and to control their blood glucose easier. GoCARB was developed at the ARTORG Institute of the University of Bern in close cooperation with Bern University Hospital.

In the course of insulin therapy, the increase in blood glucose after the intake of carbohydrates is lowered again through the injection of the hormone insulin – so-called "prandial insulin". The correct dose of prandial insulin has to be calculated on the basis of the amount of carbohydrates. But often it is difficult even for the well-trained diabetic to estimate the carbohydrate content of a meal accurately enough.

GoCARB starts here: the mobile application supports diabetics in determining the carbohydrates in meals and specifying the appropriate dose of prandial insulin. In doing so, the smartphone-based system recognises the foodstuffs on a plate by means of photos from a smartphone camera and estimates their carbohydrate content. In turn, the app automatically calculates the prandial insulin dose.

GoCARB is a four-year international research project under the direction of Stavroula Mougiakakou from the ARTORG Center for Biomedical Engineering Research of the University of Bern and Peter Diem from the University Departement of Endocrinology, Diabetes and Clinical Nutrition. The project was developed in close cooperation with Roche Diagnostics and is financed by the European Commission in the 7th research framework programme.

"We want to improve the personalised treatment of patients with diabetes mellitus," says Stavroula Mougiakakou. "There are already apps which help to estimate the carbohydrate content of a meal. But there the foodstuffs must be manually recorded or the programmes do not offer any calculation of prandial insulin."

The GoCARB prototype now offers a very simple method: the user places a reference object next to the meal and records two photos with a smartphone camera. The various foodstuffs – such as meat, vegetables and noodles – are segmented and recognised by the programme, while their form is reconstructed in 3D. Based on the 3D model, the results of segmentation and the reference object, the volume of the individual foodstuff is estimated. Knowledge of the nature and volume of the foodstuff enables the calculation of carbohydrate content with the aid of a nutritional value database. Tests on real meals revealed that the system errs by only ±6-7 grams on average. Based on this carbohydrate content and additional information the bolus calculator calculates the optimal insulin dose for this meal. The prototype works on Android phones so far and is being tested this summer.

"With this prototype we satisfy the need of diabetics for a more effective, automated and precise determination of carbohydrates in foodstuffs – this shall allow them a better diabetes control and indirectly bring them an enhanced quality of life," says Mougiakakou.

More about the University of Bern at: www.unibe.ch