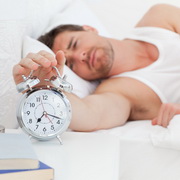 In a new study to establish a link between sleep and diabetes, researchers found that people with diabetes who sleep poorly have higher insulin resistance, and a harder time controlling the disease.

"Poor sleep quality in people with diabetes was associated with worse control of their blood glucose levels," said Kristen Knutson, assistant professor of medicine and lead author of the study. "People who have a hard time controlling their blood glucose levels have a greater risk of complications. They have a reduced quality of life. And, they have a reduced life expectancy."

People with diabetes generally have poorer sleep than the general population, and poor sleep has been proposed as a risk factor for developing the disease. Sleep disorders, such as obstructive sleep apnea, are more prevalent in people with type 2 diabetes, Knutson said.

For the study, researchers monitored the sleep of 40 people with diabetes for six nights. The subjects also reported if they generally suffered from symptoms of sleep disturbances like insomnia, snoring or sleep apnea. At clinical examinations, they gave blood samples to allow researchers to measure insulin and glucose levels.

Knutson said the next step for researchers is to see if treating poor sleep can improve long-term outcomes and quality of life for diabetics. "For someone who already has diabetes, adding a sleep treatment intervention, whether it's treating sleep apnea or treating insomnia, may be an additional help for them to control their disease," Knutson said.

In fact, restoring a healthy amount of sleep may be as powerful an intervention as the drugs currently used to treat type 2 diabetes. "This suggests that improving sleep quality in diabetics would have a similar beneficial effect as the most commonly used anti-diabetes drugs," said Eve Van Cauter, professor of medicine and co-author of the study.

Further investigation into which leads to the other – the chronic poor sleep or chronic insulin resistance – could improve the quality of life for people with type 2 diabetes. "Anything that we can do to help people improve their ability to control their glucose will help their lives in the long run," Knutson said.


- More about the University of Chicago Medical Center at www.uchospitals.edu