Insomnia among older adults may be tied to sleep quality, not duration 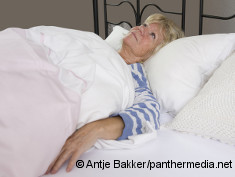 About 13 percent of older adults in the study said that they rarely or never feel rested when waking up in the morning; © Antje Bakker/ panthermedia.net

Reports of insomnia are common among the elderly, but a new study finds that sleep problems may stem from the quality of rest and other health concerns more than the overall amount of sleep that patients get.

An estimated 30 percent of adults report having some symptoms of insomnia, which includes difficulty falling asleep, staying asleep or waking up too early and then not feeling well rested during the daytime. Prior studies suggest that nearly half of older adults report at least one insomnia symptom and that lack of restorative sleep might be linked to heart disease, falls, and declines in cognitive and daytime functioning.

The new study found discrepancies between self-reported insomnia and outcomes recorded on a sleep-monitoring device. Older adults' perception of sleep does not always match what's actually happening when a more objective assessment is used to monitor sleep patterns and behaviors.

A study used data from 727 participants in the National Social Life, Health and Aging Project who were randomly invited to participate in an "Activity and Sleep Study." The activity and sleep study had two components: a self-administered sleep booklet, which included questions about the person's sleep experience, (e.g., "how often do you feel really rested when you wake up in the morning?") and 72-hours of wrist actigraphy, which is a wristwatch-like sensor that monitors sleep patterns and movements.

An author on the study, Linda Waite, the University of Chicago Lucy Flower Professor in Urban Sociology and the director of the Center on Aging at NORC at UChicago, said the researchers wanted to objectively evaluate several aspects of older adults' sleep characteristics, which is why they used the actigraphs in addition to the survey questions.

"Older adults may complain of waking up too early and not feeling rested despite accumulating substantial hours of sleep," Waite said. The actigraph measurements showed that most of the older adults got sufficient amounts of sleep.

Even though reported sleep problems are common among older individuals, according to the survey only about 13 percent of older adults in the study said that they rarely or never feel rested when waking up in the morning. About 12 percent reported often having trouble falling asleep, 30 percent indicated they regularly had problems with waking up during the night and 13 percent reported problems with waking up too early and not being able to fall asleep again most of the time.

The actigraph provided data that showed the average duration of sleep period among the study participants was 7.9 hours and the average total sleep time was 7.25 hours. Waite said this indicates that the majority of older adults are getting the recommended amount of sleep and usually not having common sleep problems.

One other unexpected finding for the researchers was that respondents who reported waking up more frequently during the night had more total sleep time. "This suggests that a question about feeling rested may tap into other aspects of older adults' everyday health or psychological experience," said Waite.

"Our findings suggest that reports of what seem like specific sleep problems from survey questions may be more accurately viewed as indicators of general problems or dissatisfaction with sleep that may be due to other issues in their lives affecting their overall well-being. These survey questions and actigraphy may measure different aspects of sleep experience."

More about the University of Chicago at: www.uchicago.edu