Interacting with Environment with the Help of Brain Signals 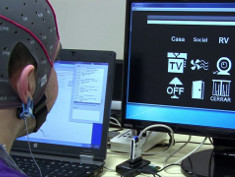 The prototype interprets users’ brain impulses so they can carry out actions that otherwise they would not be able to perform alone; © Barcelona Digital

BrainAble has demonstrated the benefits that advanced technologies bring to people with physical disabilities so severe that they cannot interact with their environment (home, friends, family) independently.

Specifically, the project has developed a prototype that allows these people to perform actions that they could not otherwise, such as writing and communicating in social networks, turning on and off the light or the television, controlling any digital home appliance, like a wheelchair, and playing in and exploring virtual environments for their entertainment. And all this is possible simply by reading electrical brain signals, without moving a muscle.

The European R&D project BrainAble, led by Barcelona Digital and aimed at improving the autonomy of people with serious physical disabilities, has just successfully ended after three years of technological research and development.

The prototype consists of a combination of human-computer interfaces composed of Brain Computer Interface (BCI) sensors with other physiological sensors that measure a person’s physical and emotional state (affective computing) and with virtual reality environments, and the connection of these interfaces with smart homes and online social networks. Thanks to this combination of technologies, the BrainAble prototype can read the brain impulses generated by the user to carry out a particular activity (for example, changing the television channel), interpret them and act on his/her behalf in the home or social environment.

Furthermore, the system learns the user’s habits and tries to understand the context in which they are being used, looking to automate some common actions (for example, regulating the temperature of the home according to the user’s taste). It can also monitor whether the patient is tired, and if he/she is, it can adapt and become easier to use. Thus, by giving them more autonomy in their daily lives, the BrainAble system allows people with severe functional disabilities to improve their social inclusion and the quality of their lives.

BrainAble was developed by a multi-disciplinary team of therapists, researchers and engineers on the frontier of neuroscience, signal processing, assistive technologies and automatic learning and is already having an impact on the growing market of accessible, inclusive and assistive products from an innovative perspective.

In a society that is increasingly sensitive to dependency from a social and economic point of view, BrainAble is aimed at a growing market in the field of disability (190 million people around the world suffer from different degrees and types of functional disability, according to the WHO). Moreover, the adaptation of the technologies developed for BrainAble to make an active and independent life easier for the elderly and people with special needs of all kinds means that the potential for exploitation is very promising.

“With BrainAble, I can do a series of tasks quickly and practically automatically. I would need a third person’s help without it, given my reduced level of mobility. With this system, I am more autonomous and independent”. These are the words of one of the patients with severe functional disability that tested the BrainAble prototype at the Guttmann Institute, a leading centre for medical and surgical treatment and the comprehensive rehabilitation of people with spinal cord injury and acquired brain injury and other disabilities of a neurological origin.

Throughout implementation of the project, a total of 69 users with disabilities (patients and users of the AbilityNet centres and of the Guttmann Institute), in addition to other healthy users, individually tested and evaluated not just the various components of the system, but also the comprehensive prototype in a cycle of three iterations, from definition of the initial requirements to subsequent validation and continuous improvement of the developments.

More about the Barcelona Digital Centre Tecnològic at: www.bdigital.org