Kids with ADHD must squirm to learn 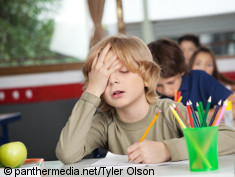 Many kids with ADHD could perform better on classroom work if they're sitting on activity balls or exercise bikes; © panthermedia.net/Tyler Olson

For decades, frustrated parents and teachers have barked at fidgety children with ADHD to "Sit still and concentrate!". But new research shows that if you want ADHD kids to learn, you have to let them squirm. The foot-tapping, leg-swinging and chair-scooting movements of children with attention-deficit/hyperactivity disorder (ADHD) are actually vital to how they remember information and work out complex cognitive tasks, according to a study published in an early online release of the Journal of Abnormal Child Psychology.

The findings show the longtime prevailing methods for helping children with ADHD may be misguided. "The typical interventions target reducing hyperactivity. It's exactly the opposite of what we should be doing for a majority of children with ADHD," said one of the study's authors, Mark Rapport, head of the Children's Learning Clinic at the University of Central Florida. "The message isn't 'Let them run around the room,' but you need to be able to facilitate their movement so they can maintain the level of alertness necessary for cognitive activities."

The research has major implications for how parents and teachers should deal with ADHD kids, particularly with the increasing weight given to students' performance on standardized testing. The study suggests that a majority of students with ADHD could perform better on classroom work, tests and homework if they're sitting on activity balls or exercise bikes, for instance.

The study at the UCF clinic included 52 boys ages 8 to 12. Twenty-nine of the children had been diagnosed with ADHD and the other 23 had no clinical disorders and showed normal development.

Each child was asked to perform a series of standardized tasks designed to gauge "working memory," the system for temporarily storing and managing information required to carry out complex cognitive tasks such as learning, reasoning and comprehension.

Children were shown a series of jumbled numbers and a letter that flashed onto a computer screen, then asked to put the numbers in order, followed by the letter. A high-speed camera recorded the kids, and observers recorded their every movement and gauged their attention to the task.

Rapport's previous research had already shown that the excessive movement that's a trademark of hyperactive children - previously thought to be ever-present - is actually apparent only when they need to use the brain's executive brain functions, especially their working memory.

The new study goes an important step further, proving the movement serves a purpose. "What we've found is that when they're moving the most, the majority of them perform better," Rapport said. "They have to move to maintain alertness."

By contrast, the children in the study without ADHD also moved more during the cognitive tests, but it had the opposite effect: They performed worse.

More about the University of Central Florida at: www.ucf.edu