Kids with Behaviour Problems: Tendency to be Bullied 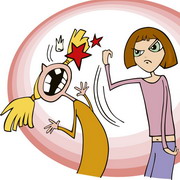 Bullying sometimes is a form of
revenge; © panthermedia.net/
Igor Zakowski

Students receiving special-education services for behavioural disorders and those with more obvious disabilities are more likely to be bullied than their general-education counterparts – and are also more likely to bully other students, a new study shows.

The findings, published in the Journal of School Psychology, highlight the complexity of bullying's nature and the challenges in addressing the problem, said lead author Susan Swearer, professor of school psychology at the University of Nebraska-Lincoln.

"These results paint a fairly bleak picture for students with disabilities in terms of bullying, victimization and disciplinary actions," wrote Swearer, a national expert on school bullying who has consulted with both the White House and Lady Gaga's Born This Way Foundation on anti-bullying initiatives. "Sadly, these are the students who most need to display prosocial behaviour and receive support from their peers."

The study found that students who received special education services were at increased risk for bullying others, for being bullied, for being sent to the school office for disciplinary problems and for engaging in antisocial behaviour.

In particular, students with observable disabilities – language or hearing impairments or mild mental handicaps – reported the highest levels of bullying others and being bullied themselves.
"The observable nature of the disability makes it easy to identify those students as individuals with disabilities, which may place them at greater risk for being the easy target of bullying," Swearer and her co-authors wrote. "Also, being frustrated with the experience of victimization, those students might engage in bullying behaviour as a form of revenge."


- More abotu the University of Nebraska-Lincoln at: www.unl.edu