Kids with Cerebral Palsy May Benefit from Video Game 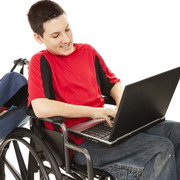 A group of scientists has found that video games offer an enjoyable opportunity to promote light to moderate physical activity in children with cerebral palsy (CP), and may have a role to play in rehabilitation therapy.

"Active video games (AVG) provide a low-cost, commercially available system that can be strategically selected to address specific therapeutic goals," says Elaine Biddiss of Toronto's Bloorview Research Institute at Holland Bloorview Kids Rehabilitation Hospital. "While our results did not show that AVG game play can be regarded as a replacement for more vigorous physical activity or muscle strengthening, we found that some games may provide targeted therapy focused on specific joints or movements."

Seventeen children with CP were studied while playing four AVGs: Wii Bowling, Tennis, Boxing, and Dance Dance Revolution (DDR). Energy, motion, and muscle activity data were captured, and the children completed a survey to indicate their level of enjoyment playing the games. The researchers evaluated the intensity of the physical activity, the therapeutic potential of AVG play, and the practical considerations surrounding the use of AVGs for physical activity promotion.

They found that children with mild CP can attain moderate levels of physical activity during AVG play with games that require full body movements, such as Wii Boxing and DDR, but the activity is not vigorous enough to build endurance or strength. However, they did find that AVG play encourages repetitive movement and provides feedback to the user through on-screen avatars and game scores, which could promote neuroplastic change. The children reported high levels of enjoyment, which also enhances neuroplasticity.

Researchers found that certain games, such as Wii boxing, may be a good choice for encouraging and training faster wrist movements. This is important for children with CP as they commonly experience difficulty in extending their wrists. Children with hemiplegia, a form of CP that affects the limbs on one side of the body, frequently underutilise their affected limb regardless of their functional abilities.

"Wii boxing, or similar games, may be an effective motivational environment for encouraging increased movement speed of the hemiplegic limb, in addition to the bilateral use of the limbs, because in-game success is strongly linked to these two metrics," says Biddiss.


- More about the Elsevier Health Sciences at: www.eu.elsevierhealth.com