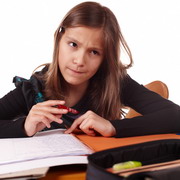 Children with ASD could benefit
from verbal learning at school;
© panthermedia.net/Christian
Schwier

Teaching children with autism to “talk things through in their head” may help them to solve complex day-to-day tasks, which could increase the chances of independent, flexible living later in life, according to new research.

The study, led by Durham University, found that the mechanism for using “inner speech” or “talking things through in their head” is intact in children with autism but not always used in the same way as typically developing children do.

The psychologists found that the use, or lack of, thinking in words is strongly linked to the extent of someone's communication impairments which are rooted in early childhood.

However, the researchers suggest teaching and intervention strategies for children targeted at encouraging inner speech may make a difference. These strategies, which include encouraging children to describe their actions out loud, have already proven useful for increasing mental flexibility among typically developing children.

It is also suggested that children with autism spectrum disorder (ASD) could, for example, benefit from verbal learning of their daily schedule at school rather than using visual timetables as is currently a common approach.

David Williams of Durham University said: "Most people will “think in words” when trying to solve problems, which helps with planning or particularly complicated tasks. Young typically developing children tend to talk out loud to guide themselves when they face challenging tasks. However, only from about the age of seven do they talk to themselves in their head and, thus, think in words for problem-solving. How good people are at this skill is in part determined by their communication experiences as a young child."

One out of every 100 people in the United Kingdom has ASD, which is diagnosed on the basis of a set of core impairments in social engagement, communication and behavioural flexibility. Children with autism often miss out on the early communicative exchanges when they are young which may explain their tendency not to use inner speech when they are older. This relative lack of inner speech use might contribute to some of the repetitive behaviours which are common in people with autism.

In the study, those individuals with more profound communication impairments also struggled most with the use of inner speech for complex tasks. People with ASD did, however, use inner speech to recall things from their short-term memory.


- More about the Durham University at: www.dur.ac.uk