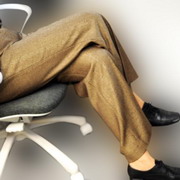 Crossing legs is linked to health
after stroke; © LMU-Klinikum

People who are able to cross their legs soon after having a severe stroke appear to be more likely to have a good recovery compared to people who can't cross their legs. That's according to new research.

"Despite having severe strokes that left them with slight loss of movement and even reduced consciousness, we noticed that some people were still able to cross their legs, which is not as easy as it seems," said study author Berend Feddersen of the University of Munich, Germany. "If this finding is confirmed, leg crossing may be an easy way to help doctors determine who may have a better chance of recovery."

People who were able to cross their legs within the first 15 days after a severe stroke were more likely to have better independence in daily life, fewer neurologic problems and lower death rates.
The study involved 68 people who had experienced a severe stroke with need of intensive care treatment including need of ventilation or need of circulatory support. Two groups of 34 were formed; one group with leg-crossers and one with non-leg-crossers. Participants were followed for one year and were tested using several scales to measure disability and independence.

In addition, both groups were given a score using the NIH Stroke Scale, which predicts outcome and severity of stroke. The leg crossing group had fewer neurologic problems at discharge from the hospital, scoring an average of 6.5 on the stroke scale, notably lower than the non-crossers who had an average score of 10.6.


- More about the American Academy of Neurology at: www.aan.com