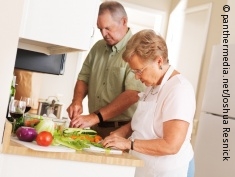 A diet rich in vegetables and fruit can help keep cholesterol levels down and also reduce Alzheimer's; © panthermedia.net/Joshua Resnick

Changes in lifestyle could reduce the risk of developing Alzheimer’s disease. That was the conclusion of a study conducted by researchers of Heidelberg University’s Network Aging Research (NAR), who examined the data from two independent epidemiological studies.

Carriers of the ApoE4 genetic risk factor for Alzheimer’s may be able to reduce their increased risk of cognitive decline by reducing their cholesterol level, especially if they also have cardiovascular disease. In Germany, approximately 20 percent of the population carries the ApoE4 risk factor. The results of the research were published in Dementia and Geriatric Cognitive Disorders.

ApoE stands for apolipoprotein E, a protein that plays a critical role in the metabolism of blood lipids. Among other things, it transports cholesterol to nerve cells which the latter require for signal exchange. There are three different genetic variants, or alleles, of the ApoE gene, which contains the blueprint for the ApoE protein. Carriers of the E4 allele, i.e. the ApoE4 genetic variant, have an increased risk of developing Alzheimer’s.

Cognitive deficits such as memory lapses can be harbingers of dementia and Alzheimer’s but can also occur independently, according to Prof. Dr. Hermann Brenner, Deputy Director of the Network Aging Research (NAR). In the NAR study led by Prof. Brenner at the German Cancer Research Center (DKFZ), epidemiologists Dr. Laura Perna and Dr. Ute Mons investigated the extent to which carriers of the E4 allele have a higher risk of cognitive deficits as they age compared to carriers of the other genetic variants.

The scientists were particularly interested in the interaction between ApoE4 and cholesterol levels. For their analyses they used blood samples and medical data from two DKFZ epidemiological studies on older adults who also took cognitive tests for memory and concentration capacity. The ESTHER Study included 1,434 individuals over the age of 70, and the KAROLA Study had 366 participants over 50.

The Heidelberg researchers found that the relationship between the ApoE4 risk factor and cognitive deficits, especially memory, was strongest in those with high cholesterol and heart disease. "One possible explanation for the results could be that the brain is especially sensitive to the effects of ApoE4 once it has already been affected by cardiovascular disease and high cholesterol," explains Laura Perna. It is most likely a complex interaction between the various factors. The ApoE4 allele not only increases the risk of Alzheimer’s, but is also associated with an increased risk of arteriosclerosis. Arteriosclerosis, a narrowing of the arteries due to fatty deposits, can cause serious cardiac problems but also supports the development of dementia. It is assumed to be caused by a high level of „bad“ LDL cholesterol in the blood, which often occurs in ApoE4 carriers. High cholesterol, in turn, is an independent risk factor for Alzheimer’s.

In spite of the fact that the relationships are not completely understood, the researchers emphasize the clinical relevance of their findings. "Both high cholesterol and cardiovascular disease are potentially avoidable, and in many cases a healthy diet and lifestyle can reduce high cholesterol," explains Prof. Brenner. Regular exercise and a diet rich in vegetables and fruit and low in animal fat help keep cholesterol levels down. "What’s good for the heart is also good for the brain and memory. This appears to be especially important for carriers of the ApoE4 risk factor."

Dr. Laura Perna and Dr. Ute Mons are research assistants in the Clinical Epidemiology and Aging Research Department led by Prof. Brenner at the DKFZ. Approximately 10,000 Saarlanders took part in the ESTHER Study, which began in 2000. The study was conducted by the DKFZ in cooperation with the Saarland Cancer Registry of the state Ministry of Social Affairs, Health, Women and Family Affairs. In the KAROLA Study, ongoing since 1999/2000, epidemiologists have been following approximately 1,200 patients undergoing clinical rehabilitation due to coronary syndrome.

More about the Ruprecht-Karls-Universität Heidelberg at: www.uni-heidelberg.de