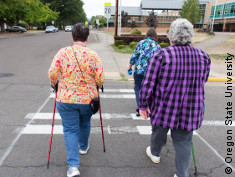 Light exercise such as walking may be as beneficial as more vigorous exercise for older adults, if they get enough of the light exercise; © Oregon State University

An easy walk, slow dancing, leisurely sports such as table tennis, household chores and other light-intensity exercise may be nearly as effective as moderate or vigorous exercise for older adults – if they get enough of that type of activity.

"New research indicates that 300 minutes a week of light exercise provides some significant health benefits for people over age 65," said Brad Cardinal, a professor in the College of Public Health and Human Sciences at Oregon State University.

Current medical recommendations suggest that all adults engage in 150 minutes of moderate exercise each week. The researchers wanted to know whether exercise of less intensity, done more often, would produce similar health benefits.

"Light exercise is more appealing to people over 65, and such activities do not generally require the approval of a physician," Cardinal said. Older adults, in particular, may be more reluctant to participate in moderate to vigorous exercise because of health concerns, including fear of injury.

The researchers examined data from the 2003 to 2006, National Health and Nutrition Examination Survey, or NHANES, which is conducted by the National Center for Health Statistics and is a nationally representative sample of the U.S. population. The 2003 to 2006 results are the only available cycles that use objectively measured physical activity data.

They found that older adults who participated in light intensity exercise activities for 300 minutes or more were 18 percent healthier, overall, than peers who did not log that much light activity. They had lower body mass index (BMI), smaller waist circumference, better insulin rates and were less likely to have chronic diseases, Cardinal said.

"These findings highlight that, in addition to promoting moderate-intensity physical activity to older adults, we should not neglect the importance of engaging in lower-intensity, movement-based behaviors when the opportunity arises," said lead author Paul Loprinzi, who earned his Ph.D. at Oregon State and now is an assistant professor of exercise science and health promotion at the University of Mississippi. "For example, instead of talking on the phone in a seated position, walking while talking will help increase our overall physical activity level."

The study was published in the current issue of the American Journal of Health Promotion. Co-author Hyo Lee also earned his doctorate at OSU and now works at Sangmyung University in Seoul, South Korea.

"The findings are part of a growing body of evidence that indicate light activity can lead to improved health, but more study is needed to better understand how the two are connected," Cardinal said. "It may also be time to rethink current exercise guidelines, with new recommendations geared specifically to adults over age 65 that emphasize the benefits and ease of participation in light activity," he said.

"This research suggests that doing something is dramatically better than doing nothing," he said. "For the average, every day person, that is a much more palatable message than the current guidelines that emphasize moderate to vigorous exercise."

More about the Oregon State University at: www.orst.edeu