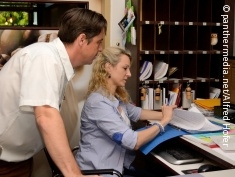 Whether people with disabilities get employed or not is mostly influenced by the person's education level; © panthermedia.net/Alfred Hofer

Researchers have explored the characteristics of people with disabilities who have achieved success in the workplace. The gap was found to be smaller among women, married people, individuals with higher educational achievement, Asians, and Hispanics, and people in their 20s and 60s. These findings can inform efforts to develop policies and practices that will narrow the persistent gap in employment between people with and without disabilities.

The article, "Individual characteristics and the disability employment gap" (doi: 10.1177/1044207315585823) appears in a special issue of the Journal of Disability Policy Studies. The authors are Purvi Sevak, PhD, of Mathematica Policy Research and Hunter College, Andrew Houtenville, PhD, and Debra Brucker, PhD, of University of New Hampshire, and John O'Neill, PhD, of Kessler Foundation.

Data were obtained from the 2009 to 2011 American Community Survey (ACS), a national survey conducted by the U.S. Census Bureau. The ACS contains a 6-question sequence that serves to identify people with disabilities. Researchers focused on the working-age population, ages 25 to 64 years, comparing data for people with and without disabilities. Four non-modifiable factors were identified – gender, age, race and ethnicity. The employment gaps were smaller for women, people in their 20s and 60s, Asians relative to whites, and Hispanics relative to non-Hispanics. Two modifiable factors were identified – marital status and educational attainment; the gaps were smaller for those who were married and individuals with higher levels of education. The factor with the greatest impact was education.

"For people with disabilities, the employment gap remains across all characteristics, despite substantial advances in technology, rehabilitative care and public policy," noted Dr. O'Neill. "Our study revealed variations in outcomes that provide insight into factors that favor employment," he continued. "For example, the employment gap declines as educational attainment increases. This factor warrants further study, including onset and severity of disability, earnings data, and access to vocational resources and other support. If the positive association between education and employment can be delineated, this would support educational policies and programs for people with disabilities."

More about the Kessler Foundation at: www.KesslerFoundation.org