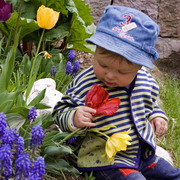 The ability of grasping may be
linked to ASD; © panthermedia.net/
Günther Vigl

Poorer movement skills detected as early as seven months old are observed in children at a higher risk of developing Autistic Spectrum Disorder (ASD) than children in the general population.

The researchers assessed the infants using a longitudinal follow-up design at 7, 14, and 24 months. Two groups of infants participated in the study: first, 54 infants at-risk of a diagnosis of ASD based on a sibling diagnosis and second 50 low-risk infants without a diagnosed sibling. The infants were assessed on a range of standardised measures of motor skills. Parent reports were also documented.


- More about the British Psychological Society at: www.bps.org.uk