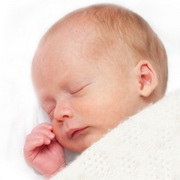 Low birthweight may be a risk
factor for ASD; © Stefan Krause/
panthermedia.net

Autism researchers at the University of Pennsylvania School of Nursing have found a link between low birthweight and children diagnosed with autism, reporting premature infants are five times more likely to have autism than children born at normal weights.

The children, some born as small as about a pound, were followed for 21 years. The infants were born between September 1984 through July 1987 in Middlesex, Monmouth, and Ocean counties in New Jersey at birthweights from 500 to 2000 grams or a maximum of about 4.4 pounds.

"As survival of the smallest and most immature babies improves, impaired survivors represent an increasing public health challenge," wrote lead author Jennifer Pinto-Martin, director of the Center Centers for Autism and Developmental Disabilities Research and Epidemiology at Penn Nursing. "Emerging studies suggest that low birthweight may be a risk factor for autism spectrum disorders."

Links between low birthweight and a range of motor and cognitive problems have been well established for some time, but this is the first study that establishes that these children are also at increased risk for autism spectrum disorders (ASD).

"Cognitive problems in these children may mask underlying autism," said Pinto-Martin. "If there is suspicion of autism or a positive screening test for ASD, parents should seek an evaluation for an ASD. Early intervention improves long-term outcome and can help these children both at school and at home."

In future studies, Penn researchers will investigate possible links between brain hemorrhage, a complication of premature birth, and autism by examining brain ultrasounds taken of these children as newborns.

The researchers, including a team at The Children's Hospital of Philadelphia, followed 862 children from birth to young adulthood finding that five percent of the children were diagnosed with autism, compared to one percent of the general population in what researchers called "the first study to have estimated the prevalence of ASD […] using research validated diagnostic instruments."


- More about the University of Pennsylvania School of Nursing at www.nursing.upenn.edu