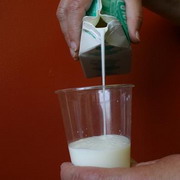 Milk is one of the sources of
vitamin D; © Theresa Hogue/OSU

A new study concludes that among older adults – especially those who are frail – low levels of vitamin D can mean a much greater risk of death.

The randomised, nationally representative study found that older adults with low vitamin D levels had a 30 per cent greater risk of death than people who had higher levels.

"What this really means is that it is important to assess vitamin D levels in older adults, and especially among people who are frail," said lead author Ellen Smit of Oregon State University.

Smit said past studies have separately associated frailty and low vitamin D with a greater mortality risk, but this is the first to look at the combined effect. This study examined more than 4,300 adults older than 60 using data from the Third National Health and Nutrition Examination Survey.

"Older adults need to be screened for vitamin D," said Smit. Her research is focused on diet, metabolism, and physical activity in relation to both chronic disease and HIV infection.

"As you age, there is an increased risk of melanoma, but older adults should try and get more activity in the sunshine," she said. "Our study suggests that there is an opportunity for intervention with those who are in the pre-frail group, but could live longer, more independent lives if they get proper nutrition and exercise."

Frailty is when a person experiences a decrease in physical functioning characterized by at least three of the following five criteria: muscle weakness, slow walking, exhaustion, low physical activity, and unintentional weight loss. People are considered "pre-frail" when they have one or two of the five criteria.

Because of the cross-sectional nature of the survey, researchers could not determine if low vitamin D contributed to frailty, or whether frail people became vitamin D deficient because of health problems. However, Smit said the longitudinal analysis on death showed it may not matter which came first.


- More about the Oregon State University at: www.oregonstate.edu