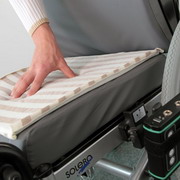 People who have to sit at work often have back pain. People permanently confined to bed are even worse off – they frequently develop bed sores. New smart cushioning is intended to eliminate the discomforts of lying and sitting. An integrated sensor system equalises pressure selectively.

Anyone confined to a wheelchair or a bed has to deal with numerous complications. Frequently, they suffer from bedsores or decubitus ulcers as physicians call them. Bony prominences, such as the sacrum, coccyx and ischium, are especially endangered spots. Unrelieved pressure can lead to tissue necrosis. Damage can extend into the periosteum and, at the worst, into bones themselves. The ulcers are entryways for germs, which can trigger sepsis. While hitherto available passive aids such as air, gel or vacuum cushions relieve pressure, they do not relieve the affected area optimally.

Some patients are also unable to actively control the distribution of pressure and alleviate their own suffering. They are dependent on others for help. Personal care assistants or family caregivers must constantly keep an eye out for the formation of pressure ulcers. A newly developed sensor mat will take over this job in the future and thus prevent tissue damage: Researchers at the Fraunhofer Institute for Factory Operation and Automation IFF in Magdeburg are endowing textile cushions with the capability to “feel” by outfitting them with smart sensor systems.

“Every person has a unique build, which must withstand differing compressive loads. Our sensor mat made of ordinary foam and conductive threads automatically detects how a person is sitting or lying, and automatically equalises the pressure at endangered points by activating an actuator. One hundred measured points on a typical seat suffice to do this,” says Martin Woitag. The trick is that the tactile sensor mat functions based on the principle of a parallel-plate capacitor. Instead of plates, two textile components are employed, which form sensor cells arranged in a matrix. Conductive thread functions as an electrode.


- Mpre about Fraunhofer IFF at www.fraunhofer.de/en