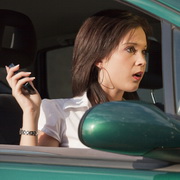 Most teens don't realise that they
drive worse when texting;
© Marina Bartel/panthermedia.net

A University at Buffalo (UB) researcher's work with a state-of-the-art driving simulator is making better drivers among those considered to be the most risky motorists on the road: teens with ADHD (attention deficit hyperactivity disorder).

Gregory A. Fabiano, UB associate professor of counseling, school and educational psychology, has already established a therapeutic program that not only helps these teens become better drivers but also builds better relationship with their parents.

Now Fabiano will extend his already successful program to other teens and their families, therapy that includes dramatic demonstrations of the unforgiving and often dramatic dangers of texting while driving.

"We had worked with children with ADHD for a long time at the university," says Fabiano. "And as those kids grew up, we heard concerns from parents about the transition to independent driving.
"So we did some research and found out results not surprising to anybody. Teen drivers are the worst on the road. And some recent research has shown that compared to that worst group of drivers, teen drivers with ADHD were significantly more at risk for everything."

"It's hard to turn on the TV or open a newspaper or magazine without seeing something about the risks of texting and driving," Fabiano says. "Because cell phones only have been around for a while, this is a recent phenomenon. And only in the past five years have text messages and texting been something we all have on our phones and in our pocket, so it's really a new distracter that teens now entering the roadway are having.

"In our research, we have yet to have somebody be a successful texter while driving, and that includes our internal staff and me," Fabiano explains. "Texting while driving impairs driving to the extent where there are deviations in the lane, on the shoulder, people spinning out, they lose control, and it's not hard to extrapolate that if that sort of thing happened on a real road, you could have hit a pedestrian, another car, a bad accident."

Fabiano says the significant conclusion of this part of his research is how the teenagers who lose control of the simulated vehicle while texting often do not realise their ability to drive was severely compromised.

"We have found teens with ADHD are like children with ADHD in that they have poor insight on the impact of their behavior on others," Fabiano says. "So most of the teens we work with think they can easily text while driving without any poor consequences."


- More about the University at Buffalo at www.buffalo.edu