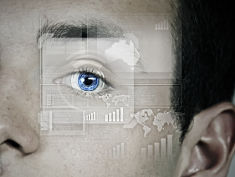 The researchers used an electrode array to stimulate retinal cells in the laboratory. This could one day improve artificial vision; © nexusplexus/ panthermedia.net

In laboratory tests, researchers have used electrical stimulation of retinal cells to produce the same patterns of activity that occur when the retina sees a moving object. Although more work remains, this is a step toward restoring natural, high-fidelity vision to blind people, the researchers say.

Just 20 years ago, bionic vision was more a science fiction cliché than a realistic medical goal. But in the past few years, the first artificial vision technology has come on the market in the United States and Western Europe, allowing people who have been blinded by retinitis pigmentosa to regain some of their sight. While remarkable, the technology has its limits. It has enabled people to navigate through a door and even read headline-sized letters, but not to drive, jog down the street, or see a loved one's face. A team based at Stanford University in California is working to improve the technology by targeting specific cells in the retina - the neural tissue at the back of the eye that converts light into electrical activity.

"We have found that we can reproduce natural patterns of activity in the retina with exquisite precision," said E.J. Chichilnisky, a professor of neurosurgery at Stanford's School of Medicine and Hansen Experimental Physics Laboratory.

The retina contains several cell layers. The first layer contains photoreceptor cells, which detect light and convert it into electrical signals. Retinitis pigmentosa and several other blinding diseases are caused by a loss of these cells. The strategy behind many bionic retinas, or retinal prosthetics, is to bypass the need for photoreceptors and stimulate the retinal ganglion cell layer, the last stop in the retina before visual signals are sent to the brain.

Several types of retinal prostheses are under development. The Argus II, which was developed by Second Sight Therapeutics with more than $25 million in support from NEI, is the best known of these devices. In the United States, it was approved for treating retinitis pigmentosa in 2013, and it is now available at a limited number of medical centers throughout the country. It consists of a camera, mounted on a pair of goggles, which transmits wireless signals to a grid of electrodes implanted on the retina. The electrodes stimulate retinal ganglion cells and give the person a rough sense of what the camera sees, including changes in light and contrast, edges, and rough shapes.

"It is very exciting for someone who may not have seen anything for 20-30 years. It's a big deal. On the other hand, it's a long way from natural vision," said Chichilnisky. Current technology does not have enough specificity or precision to reproduce natural vision, he said. Although much of visual processing occurs within the brain, some processing is accomplished by retinal ganglion cells. There are 1 to 1.5 million retinal ganglion cells inside the retina, in at least 20 varieties. Natural vision — including the ability to see details in shape, color, depth and motion — requires activating the right cells at the right time.

The new study shows that patterned electrical stimulation can do just that in isolated retinal tissue. The lead author was Lauren Jepson, Ph.D., who was a postdoctoral fellow in Chichilnisky's former lab at the Salk Institute in La Jolla, California. They focused their efforts on a type of retinal ganglion cell called parasol cells. These cells are known to be important for detecting movement, and its direction and speed, within a visual scene. When a moving object passes through visual space, the cells are activated in waves across the retina.

The researchers placed patches of retina on a 61-electrode grid. Then they sent out pulses at each of the electrodes and listened for cells to respond, almost like sonar. This enabled them to identify parasol cells, which have distinct responses from other retinal ganglion cells. It also established the amount of stimulation required to activate each of the cells. Next, the researchers recorded the cells' responses to a simple moving image — a white bar passing over a gray background. Finally, they electrically stimulated the cells in this same pattern, at the required strengths. They were able to reproduce the same waves of parasol cell activity that they observed with the moving image.

"There is a long way to go between these results and making a device that produces meaningful, patterned activity over a large region of the retina in a human patient," Chichilnisky said. "But if we can handle the many technical hurdles ahead, we may be able to speak to the nervous system in its own language, and precisely reproduce its normal function."

More about the NIH/National Eye Institute at: www.nei.nih.gov