Medi-Cal Caregivers Live In or Near Poverty 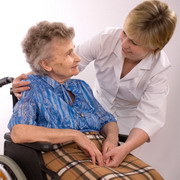 57 per cent of paid caregivers have
incomes that leave them in
poverty; © panthermedia.net/
Alexander Raths

The demand for caregivers is growing rapidly as California's population ages, but the majority of state's Medi-Cal caregivers earn poverty or near-poverty wages and have poor access to health care and food, a new study from the University of California Los Angeles Centre for Health Policy Research has found.

Fifty-seven per cent of paid Medi-Cal caregivers — and almost half of all 450,000 paid caregivers in the state — have incomes that leave them in poverty or near poverty, according to the study, "Hidden in Plain Sight: California's Paid Medi-Cal Caregivers Are Vulnerable." Medi-Cal is the state's public health insurance program for low-income seniors or adults with long-term illnesses or disabilities.

"Paid caregivers do a lot but get paid very little," said Geoffrey Hoffman. "They play a critical and complex role caring for our aging or disabled parents, grandparents, friends and neighbours yet can earn only a little more than minimum wage."

With recent state budget cuts, the situation for caregivers is already more precarious. It could worsen now that the state's Adult Day Health Care (ADHC) program has transitioned into a different program, and if further cuts are made to In-Home Supportive Services (IHSS), Hoffman noted.

An estimated 6 million caregivers in California provide much-needed services for a family member, friend or other individual with a long-term illness or disability. Of these caregivers, about 450,000 are paid for the services they provide, and two-thirds of them — approximately 290,000 — are paid Medi-Cal caregivers.

• Many paid caregivers cannot afford basic necessities: Paid Medi-Cal caregivers who earned less than 21,660 Dollars a year, which is below 200 per cent of the federal poverty level, had rates of food insecurity that were twice those of low-income unpaid caregivers. Food insecurity refers to reducing meal sizes or skipping meals due to a lack of sufficient resources to buy food.

• Paid caregiver turnover is high: Among paid Medi-Cal caregivers, nearly 16 per cent were at their current job for less than one year and only about 18 per cent had been at their job for more than 10 years.

• Paid caregivers more likely to be uninsured: Paid Medi-Cal caregivers were almost twice as likely as non-care giving adults to be currently uninsured (31 per cent versus 18 per cent).


- More about the University of California Los Angeles (UCLA) at: www.ucla.edu