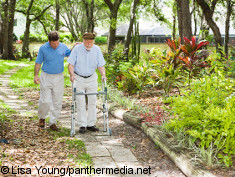 Healthcare and personal expenses associated with a stroke continue to be substantial over time; © Lisa Young/panthermedia.net

New data shows that healthcare and personal costs to support survivors of stroke remains high 10 years on. The Monash University research is the first to look at the long-term costs for the two main causes of stroke; ischemic where the blood supply stops due to a blood clot, and hemorrhagic, which occurs when a weakened blood vessel supplying the brain bursts.

Previous studies based on estimating the lifetime costs using patient data up to 5 years after a stroke, suggested that costs peaked in the first year and then declined in subsequent years.

The new findings, led by Dominique Cadilhac and Amanda Thrift from the School of Clinical Sciences at Monash Health, provides evidence that healthcare and personal expenses associated with a stroke continue to be substantial over time. The greatest ongoing costs being for aged care facilities and informal care.

243 patients who experienced an ischemic stroke – the most common type of stroke, and 43 patients with intracerebral hemorrhage stroke who went on to survive for 10 years or more were interviewed to calculate annual costs as part of the North East Melbourne Stroke Incidence Study.

Average annual healthcare costs 10 years after an ischemic stroke were $5,418 (AUD) – broadly similar to costs estimated between 3 and 5 years ($5,545). Whereas previous estimates for annual healthcare costs for intracerebral hemorrhage stroke ten years after stroke onset were $6,101, Cadilhac's team found the true cost was $9,032 far higher than costs calculated at 3 to 5 years ($6,101) because of a greater need for aged care facilities 10 years on.

Dominique Cadilhac said investment in stroke prevention is vital because the costly condition is Australia's second biggest killer. "Stroke affects thousands of people and in many cases requires ongoing medical support. We know the condition is costly to treat especially in the first year, but little data existed on the long term healthcare and personal costs, as well as the impact on the workforce, until now," she said.

"We now have a much better picture of the long term costs of stroke. Our research confirms there is no decline in costs beyond 5 years for survivors of stroke, in fact medical and other costs including those incurred by care givers continue for many years," Cadilhac said.

437,000 people in Australia are living with the effects of stroke and this figure is predicted to increase to 709,000 in 2032. It's estimated that 51,000 Australians will suffer a new or recurrent stroke this year – equivalent to one stroke every 10 minutes.

It's hoped that the new data will provide important current practice estimates for economic evaluations of the potential impact of new or existing interventions to reduce the impact of stroke.

Cadilhac said the study suggests the long-term medical costs for stroke patients with stroke have been underestimated. "The large majority of strokes that are due to modifiable risk factors, such as high blood pressure or diabetes," she said. "This study shows we need to have a renewed focus on stroke prevention because the costs of providing care to people who suffer from a stroke are unlikely to diminish."

"Prompt treatment is also essential because the sooner a person receives treatment for a stroke; the less damage to the brain is likely to happen. Health care providers can ensure the maximum opportunity for reducing the likelihood of disability and death in their patients after stroke by providing best practice care, such as access to Stroke Care Units," Cadilhac said.

More about the Monash University at: www.monash.edu.au