Medical professionals can step into their patients’ shoes now 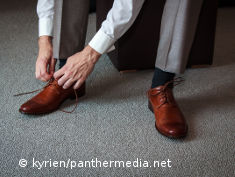 "Walking in the patient's shoes" could improve care for people with Young-onset Parkinson's; ©kyrien/ panthermedia.net

A pioneering piece of technology will allow users to experience the world through the eyes of a person with Young-Onset Parkinson’s disease, which could revolutionize the way carers and medical staff treat people with the degenerative condition.

Analogue, a theatre company set up by alumni of Royal Holloway, University of London has designed Transports, a piece of technology which uses a low cost Raspberry Pi computer system, and allows users to recreate symptoms including dizziness and speech problems, along with wearable technology which creates a 6Hz tremor in the participant’s right hand.

Young-Onset Parkinson’s is a form of the neurological condition which affects people aged under 50. Symptoms of the disease include tremors, slowed movement and falls, and with no cure currently available, how care and treatment are managed can make a significant difference to a patient’s quality of life.

The revolutionary project has been designed in collaboration with neuroscience specialist, Narender Ramnani from the Department of Psychology at Royal Holloway, along with carers, researchers and people with the disease, at Parkinson’s UK to ensure it is as effective and realistic as possible.

Liam Jarvis, Co-director of Analogue and Drama PhD Student at Royal Holloway, said: "Our principal interest is to work out how we can improve and facilitate communication and empathy by using simple technologies to immerse participants in the remote embodied experiences of others. Using inexpensive Raspberry Pi technology, we hope to expand the project to place participants inside different virtual subjects as an aid to better understand the experience of others."

The technology will now be tested with BSc psychology students at Royal Holloway and carers at Parkinson’s UK to see how it can help medical practitioners better understand their patients and in the long term improve the treatment of the disease.

Anna Farrer, User Involvement Advisor at Parkinson’s UK, said: "We know that people with Parkinson’s feel that better public awareness about the condition would mean that they face less discrimination and have a better quality of life. Projects such as Transports have an important role educating the public, raising awareness – and we hope, changing attitudes."

More about Royal Holloway, University of London at: www.rhul.ac.uk