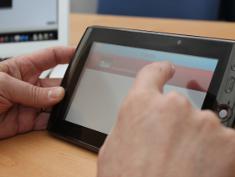 The frequency of medication errors is supposed to be reduced and the welfare and autonomy of patients improved; © Asociación RUVID

Researchers at the Universidad Miguel Hernández (UMH) in Elche have designed an application for mobile devices that helps elderly people with multiple illnesses improve medication management.

Through this personalized virtual assistant, the inventors expect to reduce the frequency of medication errors and improve the welfare and autonomy of patients. The application called ‘Alicia’ is installed in user’s tablet or the smartphone and offers more features than the regular pillbox, such as issuing alerts with photographs showing the container and the drug itself or reporting on the conservation and proper use of medicines. The program can even include tips on exercise and diet.

"The most relevant result of the pilot study we have conducted is that, according to users, the number of mistakes was halved," says the researcher José Joaquín Mira Solves. The experimental version was tested to prove the usefulness of the tool and after the good results the partners have decided to continue improving its performance. The team could prepare a commercial version in the future if they find the necessary funding.

The target audience is 65 year-olds and over who suffer from two or more chronic diseases and need five or more drugs a day, "a segment of the population that often makes mistakes in their medication management," says José Joaquín Mira, specialist in patient safety. Such errors include mixing-up pills or not taking them regularly and are committed for different reasons, such as forgetfulness, lack of information or inadequate information. "In most cases, the so-called ‘adverse events’ do not have serious consequences for the patient’s health, but about 6% require hospitalization", he adds.

Besides the design of the virtual assistant, partners have identified the most common errors in self-management of medication and safe practices used by patients over 65. "First, we conducted more than 300 interviews and surveys to see the strategies put in place to follow the doctor's instructions. A high percentage resorted to use a pillbox but this resource has some problems because the appearance of the tablets can change and this confuses the patient," says the researcher.

Another important result of the study was to determine the extent to which users knew their medication. According to José Joaquín Mira, "patients generally knew what the drugs were for but lacked information on proper storage in order to maintain the properties or on the precautions they should take, such as incompatibility with certain foods or other drugs." These results provided clues to the researchers about the type of information that should be incorporated into ‘Alicia’ depending on the patient's profile.

The evaluation of the 51 volunteers who participated in the pilot study was very positive. They indicated that they found the tool useful, easy to use and errors were reduced when taking their pills. This virtual pillbox could also help to avoid drug interactions that can occur when specialists from outside the public health system recommend drugs without seeing the patient’s digital history. Thus, the patient would be able to show the private specialist the list of medications and treatments prescribed on his or her tablet or smartphone.