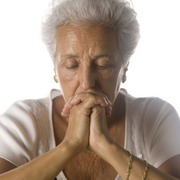 Many elderly people spend their last years alone. Spouses pass and children scatter. But being lonely is much more than a silent house and a lack of companionship. Over time, loneliness not only takes a toll on the psyche but can have a serious physical impact as well.

Feeling lonely has been linked to an increased risk of heart disease, Alzheimer's disease, depression and even premature death. Developing effective treatments to reduce loneliness in older adults is essential, but previous treatment efforts have had limited success.

What to do? Researchers at UCLA now report that a simple meditation program lasting just eight weeks reduced loneliness in older adults. Further, knowing that loneliness is associated with an increase in the activity of inflammation-related genes that can promote a variety of diseases, the researchers examined gene expression and found that this same form of meditation significantly reduced expression of inflammatory genes.

In the current online edition of the journal Brain, Behavior and Immunity, senior study author Steve Cole, a UCLA professor of medicine and psychiatry, and colleagues report that the two-month program of mindfulness-based stress reduction (MBSR), which teaches the mind to simply be attentive to the present and not dwell in the past or project into the future, successfully reduced the feelings of loneliness.

Remarkably, the researchers said, MBSR also altered the genes and protein markers of inflammation. Inflammation is a natural component of the immune system and can help fight a wide variety of bodily insults, ranging from infections to a whack by a hammer. But chronic inflammation is now known to be a primary player in the pathology of many diseases and psychological disorders.

"Our work presents the first evidence showing that a psychological intervention that decreases loneliness also reduces pro-inflammatory gene expression," Cole said. "If this is borne out by further research, MBSR could be a valuable tool to improve the quality of life for many elderly."


- More about University of California - Los Angeles at: www.newsroom.ucla.edu