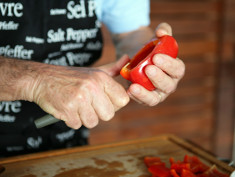 Elderly can have less difficulties with instrumental activities of daily living, such as cooking or using medications; © Phovoi R./panthermedia.net

Older adults who received as few as 10 sessions of mental (cognitive) training showed improvements in reasoning ability and speed-of-processing when compared with untrained controls participants as long as 10 years after the intervention.

These gains were even greater for those who got additional "booster" sessions over the next three years. Older adults who received brief cognitive training also reported that they had less difficulty in performing important everyday tasks.

"Showing that training gains are maintained for up to 10 years is a stunning result because it suggests that a fairly modest intervention in practicing mental skills can have relatively long-term effects beyond what we might reasonably expect," said lead author George Rebok of Johns Hopkins University in Baltimore.

Cognitive decline is prevalent in older adults and can seriously affect quality of life. To determine the potential benefits of cognitive training on cognition and daily functioning in older adults, researchers conducted the Advanced Cognitive Training for Independent and Vital Elderly (ACTIVE) study.

The investigators now report on the 10-year follow-up results of 2832 participants (with an average age of 73.6 years at the start of the study) who were randomized to three intervention groups and an untrained control group. Those in the memory training group were taught strategies for remembering word lists and sequences of items, text material, and the main ideas and details of stories.

Participants in the reasoning group received instruction on how to solve problems that follow patterns, which is useful for tasks such as reading bus schedules or completing order forms. Individuals who received speed-of-processing training participated in a computer-based program that focused on the ability to identify and locate visual information quickly, which is useful when looking up phone numbers or reacting to changes in traffic when driving. Training was conducted in small groups in ten 60 to 75 minute sessions over five to six weeks.

The team also found that a four-session booster training at 11 and at 35 months after the initial training sessions produced additional and durable improvements in the reasoning intervention group and in the speed-of-processing group.

"Our findings provide support for the development of other interventions for senior adults, particularly those that target cognitive abilities showing the most rapid decline with age and that can affect their everyday functioning and independence. Such interventions have potential to delay the onset of difficulties in daily functioning," said Rebok. He added that even small delays in the onset of mental and functional impairments may have a large impact on public health and help reduce rising health care costs.

Additional studies are warranted to determine how even relatively brief interventions can have such lasting effects that transfer to self-reported everyday functioning. Rebok and his team are also interested in testing whether the training sessions help older adults maintain safe driving skills. They also hope to test whether more training over a longer period will have even stronger effects on elders' functioning.

More about Wiley at: www.wiley.com