Microneedles to Target Therapeutics to the Back of the Eye 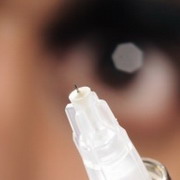 A prototype microneedle used to
inject therapeutics into specific
locations in the eye; © Georgia
Tech

Thanks to tiny microneedles, eye doctors may soon have a better way to treat diseases such as macular degeneration that affect tissues in the back of the eye. That could be important as the population ages and develops more eye-related illnesses.

For the first time, researchers from the Georgia Institute of Technology and Emory University have demonstrated that microneedles less than a millimeter in length can deliver drug molecules and particles to the eye in an animal model. The injection targeted the suprachoroidal space of the eye, which provides a natural passageway for drug injected across the white part (sclera) of the eye to flow along the eye's inner surface and subsequently into the back of the eye. The minimally-invasive technique could represent a significant improvement over conventional methods that inject drugs into the center of the eye – or use eyedrops, which have limited effectiveness in treating many diseases.

"This research could lead to a simple and safe procedure that offers doctors a better way to target drugs to specific locations in the eye," said Samirkumar Patel, researcher at Georgia Tech. "The design and simplicity of the microneedle device may make it more likely to be used in the clinic as a way to administer drug formulations into the suprachoroidal space that surrounds the eye."

Patel said the study also showed that the suprachoroidal space could accommodate a variety of drugs and microparticles. That could open the door for the use of timed-release drugs that could reduce the need for frequent injections to treat chronic eye diseases.

The suprachoroidal space is located between two important structures in the eye: the sclera and the choroid. Fluids injected into that space travel circumferentially around the eye, which flows drug solution directly over the choroid and adjacent retina – which are the targets for many drug compounds. The new study showed that injections of fluids containing molecules and particles into that space not only reach the targeted structures, but also remain there for extended time periods. And equally important, the molecules and particles do not significantly reach the lens or front part of the eye, where side effects from drugs can occur.