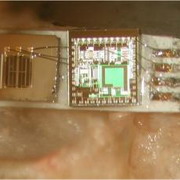 The microphone is implanted in
the middle-ear; © University of
Utah

A microphone and related electronics of cochlear implants must be worn outside the head, raising reliability issues, preventing patients from swimming and creating social stigma. Now, a University of Utah engineers have developed a tiny prototype microphone that can be implanted in the middle ear.

The proof-of-concept device has been successfully tested in the ear canals of four cadavers.

The prototype – about the size of an eraser on a pencil – must be reduced in size and improved in its ability to detect quieter, low-pitched sounds, so tests in people are about three years away, says the study's senior author, Darrin J. Young.

The study showed incoming sound is transmitted most efficiently to the microphone if surgeons first remove the incus or anvil – one of three, small, middle-ear bones. United States Food and Drug Administration approval would be needed for an implant requiring such surgery.

The current prototype of the packaged, middle-ear microphone measures 2.5-by-6.2 millimeters (roughly one-tenth by one-quarter inch) and weighs 25 milligrams, or less than a thousandth of an ounce. Young wants to reduce the package to 2-by-2 millimeters.

The National Institutes of Health says almost 220,000 people worldwide with profound deafness or severe hearing impairment have received cochlear implants, about one-third of them in the United States, where two-fifths of the recipients are children.

In conventional cochlear implant, there are three main parts that are worn externally on the head behind the ear: a microphone to pick up sound, a speech processor and a radio transmitter coil. Implanted under the skin behind the ear are a receiver and stimulator to convert the sound signals into electric impulses, which then go through a cable to between four and 16 electrodes that wind through the cochlea of the inner ear and stimulate auditory nerves so the patient can hear.

"It is a disadvantage having all these things attached to the outside" of the head, Young says. "Imagine a child wearing a microphone behind the ear. It causes problems for a lot of activities. Swimming is the main issue. And it is not convenient to wear these things if they have to wear a helmet."