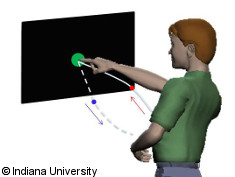 "This is the first time we have been able to explicitly characterize subtypes of severity in autism spectrum disorder," said Jorge V. José, vice president of research at Indiana University and the James H. Rudy Professor of Physics in the IU Bloomington College of Arts and Sciences. "We also have determined that a pattern exists in the movement variations in some cases between children with autism and their parents, leading us to surmise that genetics plays a role in movement patterns."

In a blinded study, José, who also is a professor of cellular and integrative physiology at the IU School of Medicine, and co-principal investigator Elizabeth B. Torres, an assistant professor in the Department of Psychology in the School of Arts and Sciences at Rutgers University, attached high-sensitivity movement sensors to the arms of study participants to track their micro-movements as they extended and retracted their hand to touch a specific spot on a touch screen.

Using analytics they developed, José and Torres, together with Di Wu, a Ph.D. graduate student in José's lab in the physics department at IU Bloomington, evaluated the local spikes in speed – traditionally considered as noise in the data. The sensors recorded 240 movements per second for the 30 people with autism, eight healthy adults and 21 parents of children with autism tested. The participants were asked to touch a spot on a screen moving continuously about 100 consecutive times.

"These variations in the hand's movement speed produced a pattern that clustered in specific regions of a graph that produced metrics we could use – not only in children with autism but in their parents," Torres said. "People with autism are known to have problems with sensing their body motions and sensing their body in general. Our earlier research proved that the random patterns of their speed were significant. What we did not expect was to find random, minute speed fluctuations during the intentional action itself, much less identify this form of intentional tremor in some of their parents."

"In healthy adults, the minute fluctuations in the speed of their movements, which we call peripheral spikes or p-spikes, normally occur at the onset or at the end of the arm extension exercise," Wu said. "They show very few p-spikes during the actual action, as the hand speeds up or slows down en route to the target. However, healthy children in the 3-to-5-year-old range have random patterns of p-spikes, as do adults and children with autism spectrum disorder."

What this suggests, the researchers said, is that p-spikes normally become more organized with age in typically developing individuals. But, in children and adults with autism, the p-spikes remained random. The researchers tested people with autism between the ages of 3 and 30 and identified an absence of transition that typically developing children undergo after 4 or 5 years of age.

The researchers also tested 14 mothers and seven fathers who have a child with autism. When evaluating the noise from the data produced from the parents, the researchers were surprised to find that some of the parents had random p-spikes clustering in the graph similar to that of their children.

"This finding suggests that genetics may play a role in p-spike patterns," Wu said. "We will need to further explore this result in other populations with neurodevelopmental disorders of known genetic origins and their family to better understand the surprising findings."

Drs. José and Torres said the p-spike patterns are useful in determining severity of the disorder. "Normally, children get more coordinated as they age, but we found that the young children with autism and the adults with autism all produced random p-spikes showing that they do not transition as they develop," José said. "We also found a correlation between the randomness of the p-spikes and the severity of the autism disorder. Among those with autism, the more random their p-spikes, the lower spoken language ability they had overall."

More about the Indiana University at: www.iu.edu