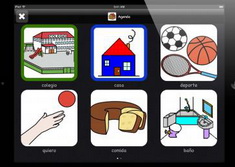 University of Granada researchers have developed a cell phone that can be downloaded free and improves basic competences (maths, language, knowledge of the environment, autonomy and social skills) in children with autism-related disorders or Down’s Syndrome.

This application – named Picaa – can be used on iPhone, iPad and iPod touch and has been translated into several languages (English, Galician, Arab, etc.). This application has topped the 20,000 downloads from App Store – mainly from Spain and the USA – since its release.

Picaa is a system designed for the development of learning and communication activities to be performed in class. According to the main developer of this application, Álvaro Fernádez, this platform is aimed at children and teenagers with some kind of cognitive, visual or hearing disability. It includes a number of activities enhancing perception, vocabulary acquisition, phonetic and syntactic performance, memory development and eye-hand coordination in children with Down’s syndrome.

To develop Picaa, the researchers conducted a study including a sample of 39 students with special needs from 14 centers in Andalusia, Murcia, Valencia, Madrid and Galicia, Spain. All centers used this application for four months. Next, the researchers evaluated the progress made by its users in perception, vocabulary acquisition, phonetic and syntactic performance, memory development and eye-hand coordination using a pre-test/post-test scheme. The researchers found that all participants had significantly improved these skills. “We associated developmental improvements in these children with the use of our application,” Fernández states.


- More about the University of Granada at: www.ugr.es