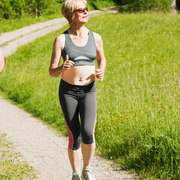 Research conducted at Texas Health Presbyterian Hospital's Institute for Exercise and Environmental Medicine in Dallas suggests that it's never too late for women to reap the benefits of moderate aerobic exercise.

In a 3-month study of 16 women age 60 and older, brisk walking for 30-50 minutes three or four times per week improved blood flow through to the brain as much as 15%.

At the beginning of the study, the researchers used Doppler ultrasonography to measure blood flow in the women's internal carotid arteries, which are located in the neck and supply the brain with necessary glucose and oxygen-rich blood. After assessing the women's physical health and maximal oxygen consumption (VO2 max), which is the body's maximum capacity to transport and use oxygen during exercise, the team tailored training programs for each woman according to her fitness level.

According to Rong Zhang, the lead researcher in the study, the results provide insight into how vascular health affects brain health. "There are many studies that suggest that exercise improves brain function in older adults, but we don't know exactly why the brain improves. Our study indicates it might be tied to an improvement in the supply of blood flow to the brain."

Whether the increased blood flow to the brain improves learning and reasoning has yet to be determined, says Zhang. "We do know there is strong evidence to suggest that cardiovascular risk is tied to the risk for Alzheimer's disease. We want to see how we can fight that," he says.

Zhang stresses the importance of the finding that improvement in brain blood flow is possible in one's senior years. "We often start to see a decline in brain perfusion and cognitive function in the 60s and 70s. That's when the downward trajectory starts. We want to see how much we can do to reverse or delay that process."


- More about the Federation of American Societies for Experimental Biology at www.faseb.org