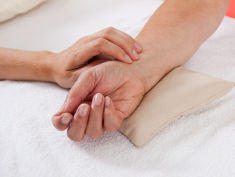 Regularly monitoring your pulse after a stroke may be an effective first step in detecting irregular heartbeat, a major cause of having a second stroke;
© leaf/panthermedia.net

New research suggests that regularly monitoring your pulse after a stroke or the pulse of a loved one who has experienced a stroke may be a simple and effective first step in detecting irregular heartbeat, a major cause of having a second stroke.

"Screening pulse is the method of choice for checking for irregular heartbeat for people over age 65 who have never had a stroke. Our study shows it may be a safe, effective, noninvasive and easy way to identify people who might need more thorough monitoring to prevent a second stroke," said study author Bernd Kallmünzer, with Erlangen University in Erlangen, Germany.

For the study, 256 people who had experienced a type of stroke called an acute ischemic stroke and the patients´ relatives were given instructions on measuring the pulse to detect irregular heartbeat, one type of which is called atrial fibrillation. The measurements taken from the participants and health care professionals were then compared to a recording of electrical activity in the heart, which showed that 57 of the participants had irregular heartbeats.

For patients taking their own measurements, 89 percent performed reliable measurements with a sensitivity of 54 percent and specificity of 96 percent. False positive results occurred in six people and false negative results in 17 people.

"The low rate of false positives in this study shows that health care professionals, caregivers and patients can be guided to use this simple tool as a first step in helping to prevent a second stroke," said Kallmünzer.