More than half of Asian-Americans with diabetes are undiagnosed 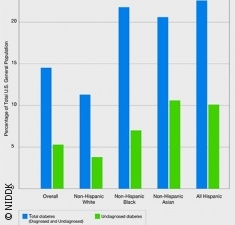 The graph shows the percentage of the U.S. adult population – both as a whole and by ethnic/racial subgroup – with diabetes (blue bars) and the percentage who have diabetes that has not been diagnosed (green bars); © NIKKD

More than half of Asian Americans and nearly half of Hispanic Americans with diabetes are undiagnosed, according to researchers from the National Institutes of Health and the Centers for Disease Control and Prevention. Their results were published Sept. 8 in JAMA, the Journal of the American Medical Association.

Additionally, prevalence of diabetes for all American adults went up, from nearly 10 percent to over 12 percent between 1988 and 2012. Diabetes prevalence – how common the condition is – also went up in every age, sex, level of education, income and racial/ethnic subgroup. One bright spot: The proportion of people with diabetes that was undiagnosed decreased 23 percent between 1988-1994 and 2011-2012. The statistics account for age differences across the surveys.

Using newly available 2011-2012 data from the CDC's National Health and Nutrition Examination Survey (NHANES), researchers were able to quantify diabetes prevalence for Asian Americans for the first time and found that they have the highest proportion of diabetes that was undiagnosed among all ethnic and racial subgroups studied, at 51 percent. Diabetes was also common in Asian Americans, at 21 percent. Hispanic Americans had the highest prevalence of diabetes at nearly 23 percent, with 49 percent of that undiagnosed.

"The large proportion of people with undiagnosed diabetes points to both a greater need to test for type 2 diabetes and a need for more education on when to test for type 2 diabetes, especially since populations such as Asian Americans may develop type 2 at a lower body mass than other groups," said the study's senior author, Catherine Cowie, Ph.D., director of diabetes epidemiology programs at the NIH's National Institute of Diabetes and Digestive and Kidney Diseases (NIDDK).

Researchers used NHANES results from 26,415 adults between 1988 and 2012. For the 2011-2012 survey, NHANES surveyed a disproportionate number of Asian Americans.

"By NHANES surveying a much larger group of Asian Americans to provide more precise statistics, we're able to identify with hard data a problem that had not been well-studied in the past," said first author Andy Menke, Ph.D., an NIDDK contractor. "However, the Asian population is diverse, and we do not yet have data on differences within that population. Getting more specific data on Asian and other subgroups may help better pinpoint education and diagnosis efforts."

"By learning more about who has diabetes – and who has the disease but does not know it – we can better target research and prevention efforts," said NIDDK Director Griffin P. Rodgers, M.D. "We have treatments to help people with diabetes, but treatments can only help those who have been diagnosed. I hope our research can serve as a reminder for people at risk for diabetes to get screened for this potentially devastating disease."

More about the NIH/National Institute of Diabetes and Digestive and Kidney Diseases at: www.niddk.nih.gov