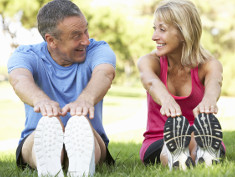 In order to lower the risk of stroke men should consider exercising at least four times a week; © Cathy Yeulet/panthermedia.net

Here's yet another reason to get off the couch: new research findings suggest that regularly breaking a sweat may lower the risk of having a stroke.

A stroke can occur when a blood vessel in the brain gets blocked. As a result, nearby brain cells will die after not getting enough oxygen and other nutrients. A number of risk factors for stroke have been identified, including smoking, high blood pressure, diabetes and being inactive.

For this study, Michelle N. McDonnell, from the University of South Australia, Adelaide and her colleagues obtained data from the Reasons for Geographic and Racial Differences in Stroke (REGARDS) study. REGARDS is a large, long-term study funded by the NIH National Institute of Neurological Disorders and Stroke (NINDS) to look at the reasons behind the higher rates of stroke mortality among African-Americans and other residents living in the Southeastern United States.

The researchers reported data for over 27,000 participants who were stroke-free at the start of the study and followed for an average of 5.7 years. One-third of participants reported exercising less than once a week. Study subjects who were inactive were 20 percent more likely to experience a stroke or TIA than participants who exercised four or more times a week.

The findings revealed that regular, moderately vigorous exercise, enough to break a sweat, was linked to reduced risk of stroke. Part of the protective effect was due to lower rates of known stroke risk factors such as hypertension, diabetes, obesity and smoking.

The researchers also looked at the data according to gender. After the researchers accounted for age, race, socioeconomic factors (education and income) and stroke risk factors, the results revealed that men who exercised at least four times a week still had a lower risk of stroke than men who exercised one to three times per week. In contrast, there was no association between frequency of exercise and stroke risk among women in the study. However, there was a trend towards a similar reduction in stroke risk for those who exercised one to three times a week and four or more times a week compared to those who were inactive.

The results should encourage doctors to stress the importance of exercise when speaking with their patients, Howard said. "Physical inactivity is a major modifiable risk factor for stroke. This should be emphasized in routine physician check-ups along with general education about the benefits of exercise on stroke risk factors including high blood pressure, diabetes and being overweight or obese," she said.

The study suggests that men should consider exercising at least four times a week.

REGARDS will continue to assess stroke risk factors to look for long-term patterns in the study population. "Findings from this study, including the current physical activity results, will ultimately help us to identify potential targets for immediate intervention as well as for future clinical trials aimed at preventing stroke and its consequences," said Moy.

More about the National Institute of Neurological Disorders and Stroke at: www.ninds.nih.gov