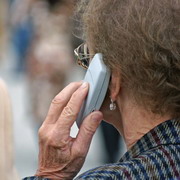 Older people should better not use
their mobile phone while crossing
the street; © panthermedia.net/
Sarah Stabenow

Older adults may put themselves at risk by talking on cell phones while crossing the street, researchers report in a new study.

The researchers found that adults aged 59 to 81 took significantly longer than college students to cross a simulated street while talking on a mobile phone, and their heightened cautiousness in initiating crossing did nothing to improve their safety. Older adults on cell phones also were more likely to fail to cross in the time allotted for the task.

In the study, 18 undergraduate students (aged 18 to 26 years) and 18 older adults crossed simulated streets of varying difficulty while either undistracted, listening to music or conversing on a hands-free cell phone.

The older adults were significantly impaired on the most challenging street-crossing tasks while also engaged in a second activity, with the most pronounced impairment occurring during cell phone conversations. The younger adults showed no impairment on dual-task performance, the researchers found.

"It should be noted that we have previously found that younger adults show similar performance decrements, but under much more challenging crossing conditions," said lead author Mark Neider, a postdoctoral researcher who conducted the study with Illinois psychology professor.

"Combined with our previous work, the current findings suggest that while all pedestrians should exercise caution when attempting to cross a street while conversing on a cell phone, older adults should be particularly careful," Neider said.


- More about the University of Illinois at: www.uiuc.edu