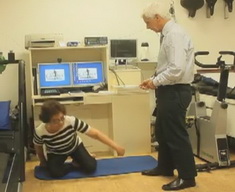 The test was a simple assessment of the
subjects' ability to sit and rise unaided from
the floor; © European Society of Cardiology

A simple screening test of musculo-skeletal fitness has proved remarkably predictive of all-cause mortality in a study of more than 2000 middle-aged and older men and women.

The study was performed in Brazil by Claudio Gil Araújo and colleagues at the Clinimex - Exercise Medicine Clinic in Rio de Janeiro.

The test was a simple assessment of the subjects' ability to sit and then rise unaided from the floor. The assessment was performed in 2002 adults of both sexes and with ages ranging from 51 to 80 years. The subjects were followed-up from the date of the baseline test until the date of death or 31 October 2011, a median follow-up of 6.3 years.

Before starting the test, they were told: "Without worrying about the speed of movement, try to sit and then to rise from the floor, using the minimum support that you believe is needed."

Over the study period 159 subjects died, a mortality rate of 7.9 percent. The majority of these deaths occurred in people with low test scores – indeed, only two of the deaths were in subjects who gained a composite score of 10. Analysis found that survival in each of the four categories differed with high statistical significance. These differences persisted when results were controlled for age, gender and body mass index, suggesting that the sitting-rising test score is a significant predictor of all-cause mortality; indeed, subjects in the lower score range (C1) had a 5 to 6 times higher risk of death than those in the reference group (C4).

Commenting on the results, the investigators said that a high score in the sitting-rising test might "reflect the capacity to successfully perform a wide range of activities of daily living, such as bending over to pick up a newspaper or a pair of glasses from under a table".

However, in this study a composite score below 8 (that is, requiring more than one hand or knee support to sit and rise from the floor in a stable way) were associated with 2 fold higher death rates over the 6.3 year study period. By contrast, scores in the range of 8 indicated a particularly low risk of death during the tracking period. "Even more relevant," reported the investigators, "is the fact that a 1-point increment in the [sitting-rising] score was related to a 21 percent reduction in mortality." They added that this is the first study to demonstrate the prognostic value of the sitting-rising test.


- More about the European Society of Cardiology at: www.escardio.org