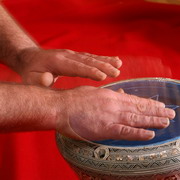 A jam session twice a month: This is no ordinary jam band; all its members have Parkinson's disease. A diverse group of men and women, ranging in age and ethnicity, gather in a circle with instruments in hand and sing together.

They are participating in Creative Arts for Parkinson's, a music and drama therapy program offered through Northwestern's Parkinson's Disease and Movement Disorders Center.

Creative Arts for Parkinson's is lead by specially trained music and drama therapists from the Institute for Therapy through the Arts (ITA). The participants are asked to reach deep into their emotions and to push themselves physically to achieve the therapeutic benefits which address both the symptoms of the disease and its psychological burden.

"Patient care is much more than just medical; it's caring for the whole person," said Tanya Simuni, MD, a neurologist at Northwestern Memorial Hospital and director of the Parkinson 's Disease and Movement Disorders Center. Simuni is also an associate professor of neurology at Northwestern University Feinberg School of Medicine. "By providing music and drama therapy, we are hoping to help these patients find new means of fulfillment in their lives while also addressing some of the physical components of their illness."

Parkinson's disease is a neurodegenerative brain disorder that affects nearly 1.5 million Americans. Progressing slowly in most people, the disease involves a lack of dopamine in the brain which causes symptoms including tremor, slowness of movement, muscle stiffness and balance problems.

Music and drama therapy addresses many of the physical and emotional components of Parkinson's disease. Benefits include improvement of physical coordination and functional movement, postural awareness, as well as speech and voice enrichment.


- More about the Northwestern Memorial Hospital at: www.nmh.org