Music proves to be a real hit in dementia project 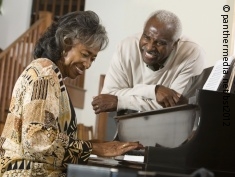 The research team have also prepared a free report illustrating the lessons learned from their pilot project; © panthermedia.net/bst2012

Creative activities, such as designing musical instruments, can improve the quality of life of people with dementia, according to researchers at Lancaster University. The 'Ageing Playfully' research project also found activities that stimulate multisensory experiences, including tactile, auditory and visual, and encourage physical exercise, such as upper body movement, increase group engagement and social inclusion.

The team found their 'well-facilitated' Lancaster workshops helped to uplift the mood of people with dementia and contributed to their social connectedness. The project will culminate in the creation of a musical instrument based toolkit as a way of enabling other people, across a wide range of settings, to enjoy the benefits.

The research team have also prepared a free report illustrating the lessons learned from their pilot project which includes recommendations on how other organisations can run similar workshops.

'Ageing Playfully' brought together academic researchers, designers and artists, from Lancaster University and professionals from Age UK Lancashire to work with a community of people in the early stages of dementia, their carers and community workers.

It was designed and funded as part of The Creative Exchange, an Arts and Humanities Research Council (AHRC) Knowledge Exchange Hub, which aims to catalyse collaboration between academics and non-academics, by working together on imaginative and innovative products, services and experiences through a series of short projects.

The aim of the first stage of the project was to offer a creative, playful and supportive space during a series of four workshops, where people with dementia were given the opportunity to co-design 2D collages and 3D models, to stimulate and facilitate physical mobility, imagination and social interaction.

The workshops were set up within the context of an existing weekly drop-in activity, run as part of the Age UK Lancashire ‘circle of support’ initiative. There were 12 willing participants and a carer and two support workers. Activities included a ‘warm-up’ with games and singing. Participants worked in small groups to co-design and make models with themes based on activities which they chose themselves.

Initially the focus was on being outdoors in the garden, having meals, dancing, singing and social activities. The most popular theme to emerge was music and in the last two workshops participants co-designed musical, mainly percussive models, using a range of art and modelling materials.

"Participants as co-designers expressed enjoyment and enthusiasm, when given this opportunity to engage playfully with each other in imagining and building models. Their carers and support workers noted how the workshop activities seemed to encourage interaction, with even the reticent, less confident members of the group joining in with the model building," said Senior Lecturer in Design Interactions at Lancaster University Dr Emmanuel Tsekleves, who led the project. "Furthermore, carers and Age UK support staff reported that workshop participants retained the positive feelings even whilst at home and each time they arrived at the workshop associated these positive feelings with the workshop facilitators."

The project team encouraged interaction outside each workshop session by sending participants a postcard featuring a picture of the 2D or 3D model they had helped to create to help them remember their part in the model building and to be reminded of the next workshop.

This project acknowledged the need for innovative and creative ways to engage with, and support, the increasing numbers of older people with dementia in the UK in their daily activities.

This first phase is planned to lead to a second phase of development using the participants’ models to explore potential digital-physical technologies that could creatively enhance physical mobility and mental facility and imagination for those with dementia, their carers and community workers.

More about the Lancaster University at: www.lancs.ac.uk