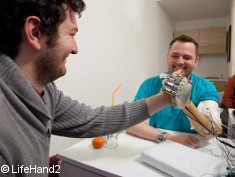 Researchers have created a new neural interface to provide sensory information from an artificial hand to the brain; © LifeHand2

A prosthetic hand, which provides a sense of touch acute enough to handle an egg, has been completed and is now exploited by the NEBIAS project after ten years of EU-funded research. The world’s most advanced bionic hand was tested with the help of amputee Dennis Aabo Sørensen who was able to grasp objects intuitively and identify what he was touching, while blindfolded.

Researchers have created a new neural interface to provide sensory information from an artificial hand to the brain. This interface is able to link the patient’s nervous system with the artificial sensors, embedded in the prosthesis, enabling the user to control complex hand and finger movements.

Sørensen, whose hand was amputated ten years ago, has been participating in the project’s experiments, "They gave me a baseball to hold and for the first time in a decade I could feel I was holding something round in my prosthetic hand."

To make it possible for Sørensen to feel the shape of the object he was holding, the researchers first had to develop a selective, implantable neuro-interface. "Selective means, for example, that when I’m talking to you in a crowd, I’m not talking to a guy sitting close to you. In other words, the electrodes have an interface with some areas of the nerves and not with others close by," explains project coordinator Silvestro Micera. Micera and his team enhanced the artificial hand with sensors that detect information about touch, which is sent in real time to the patient, allowing for the natural control of the hand.

With the prototype passing its initial tests with flying colours, the next stage is to identify two or three people to test the prosthesis over some years, with all the elements being portable, wearable or implanted. If that works, in five or six years from now the final stage would be a large-scale clinical trial to establish if the prosthesis can be used widely. Micera firmly believes the prosthesis will be available in ten years time.