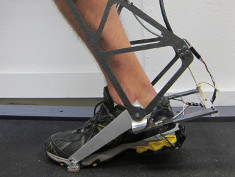 Three projects have been awarded funding by the National Institutes of Health to develop innovative robots that work cooperatively with people and adapt to changing environments to improve human capabilities and enhance medical procedures. Funding for these projects totals approximately $2.4 million over the next five years, subject to the availability of funds.

The awards mark the second year of NIH's participation in the National Robotics Initiative (NRI), a commitment among multiple federal agencies to support the development of a new generation of robots that work cooperatively with people, known as co-robots.

"These projects have the potential to transform common medical aids into sophisticated robotic devices that enhance mobility for individuals with visual and physical impairments in ways only dreamed of before," said NIH Director Francis S. Collins. "In addition, as we continue to rely on robots to carry out complex medical procedures, it will become increasingly important for these robots to be able to sense and react to changing and unpredictable environments within the body. By supporting projects that develop these capabilities, we hope to increase the accuracy and safety of current and future medical robots."

NIH has funded three projects to help develop co-robots that can assist researchers, patients, and clinicians.

A Co-Robotic Navigation Aid for the Visually Impaired by Cang Ye, University of Arkansas at Little Rock: The goal is to develop a co-robotic cane for the visually impaired that has enhanced navigation capabilities and that can relay critical information about the environment to its user. Using computer vision, the proposed cane will be able to recognize indoor structures such as stairways and doors, as well as detect potential obstacles. Using an intuitive human-device interaction mechanism, the cane will then convey the appropriate travel direction to the user. In addition to increasing mobility for the visually impaired and thus quality of life, methods developed in the creation of this technology could lead to general improvements in the autonomy of small robots and portable robotics that have many applications in military surveillance, law enforcement, and search and rescue efforts.

MRI-Guided Co-Robotic Active Catheter by M. Cenk Cavusoglu, Case Western Reserve University, Cleveland: Atrial fibrillation is an irregular heartbeat that can increase the risk of stroke and heart disease. By purposefully ablating (destroying) specific areas of the heart in a controlled fashion, the propagation of irregular heart activity can be prevented. This is generally achieved by threading a catheter with an electrode at its tip through a vein in the groin until it reaches the patient's heart. However, the constant movement of the heart as well as unpredictable changes in blood flow can make it difficult to maintain consistent contact with the heart during the ablation procedure, occasionally resulting in too large or too small of a lesion. The aim is to develop a co-robotic catheter that uses novel robotic planning strategies to compensate for physiological movements of the heart and blood and that can be used while a patient undergoes MRI—an imaging method used to take pictures of soft tissues in the body such as the heart. By combining state-of-the art robotics with high-resolution, real-time imaging, the co-robotic catheter could significantly increase the accuracy and repeatability of atrial fibrillation ablation procedures.

Novel Platform for Rapid Exploration of Robotic Ankle Exoskeleton Control by Stephen G. Sawicki, North Carolina State University, Raleigh; Steven Collins, Carnegie Mellon University, Pittsburgh: Wearable robots, such as powered braces for the lower extremities, can improve mobility for individuals with impaired strength and coordination due to aging, spinal cord injury, cerebral palsy, or stroke. However, methods for determining the optimal design of an assistive device for use within a specific patient population are lacking. This project proposes to create an experimental platform for an assistive ankle robot to be used in patients recovering from stroke. The platform will allow investigators to systematically test various robotic control methods and to compare them based on measurable physiological outcomes. Results from these tests will provide evidence for making more effective, less expensive, and more manageable assistive technologies.

More about the NIH at: www.nibib.nih.gov