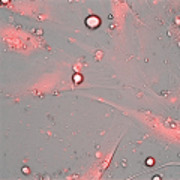 Nanodevice developed: Its potential
future use ranges from the
treatment of diseases involving
tissue; © Asociación RUVID

A team of Spanish scientists of the Asociación RUVID has developed an intelligent nanodevice that lays the foundations for the future development of new therapies against aging. The device consists of nanoparticles that can selectively release drugs in aged human cells.

The nanodevice's potential future use ranges from the treatment of diseases involving tissue or cellular degeneration such as cancer, Alzheimer's or Parkinson's, among others, to accelerated aging disorders (progeria).

"The nanodevice that we have developed consists of mesoporous nanoparticles with a galactooligosaccharide outer surface that prevents the release of the load and that only selectively opens in degenerative phase cells or senescent cells. The proof of concept demonstrates for the first time that selected chemicals can be released in these cells and not in others," says researcher Ramón Martínez Máñez.

José Ramón Murguía explains that senescence is a physiological process of the body to eliminate aged cells or ones with alterations that may compromise their viability. "When we are young senescence mechanisms prevent, for example, the appearance of tumors, the problem is that with age senescent cells accumulate in organs and tissues, disrupting their proper functioning. The elimination of these cells would slow down the appearance of diseases associated with aging. Our work shows that we can develop a targeted therapy against these cells," says Murguía.

The researchers have evaluated the utility of the new nanodevices in primary cell cultures derived of patients with accelerated aging syndrome dyskeratosis congenita. Such cultures show a high percentage of senescence characterized by elevated levels of beta-galactosidase activity, an enzyme characteristic of senescent state. "The aging cells overexpress this enzyme so we have designed nanoparticles that open when detected and release their contents in order to eliminate senescent cells, prevent deterioration or even reactivate for their rejuvenation," explains Murguía.

"There are a number of diseases associated with premature aging of tissues, many of which affect very young patients and for whom there is no therapeutic alternative, as in the case of dyskeratosis congenita or aplastic anemia. Other diseases affect adults, as idiopathic pulmonary fibrosis or liver cirrhosis. These nanoparticles represent a unique opportunity to selectively deliver therapeutic compounds to affected tissues and rescue their viability and functionality" explains researcher Rosario Perona.

The next step of this research is to test the devise with therapeutic agents and validate it in animal models. "As far as we know this is the first time that a nanotherapy for senescent cells has been described. Although there is still far to go from these results to the possible elimination of senescent cells or rejuvenation therapies, we believe that our research may open new paths for developing therapies for the treatment of age-related diseases," says Máñez.

According to the researchers, the nanodevice they have designed can also be useful for developing cosmetic therapies for external use for improving skin and hair, as an anti-wrinkle or anti-aging treatment, or a ultraviolet radiation shield or to address alopecia, all of which are associated with the accumulation of senescent cells, conclude Máñez and Murguía.