Nearly One-Third of Children with Autism also Have ADHD 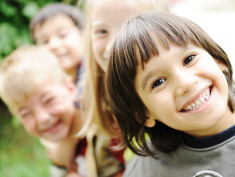 Children with ADHD and ASD may need different treatment methods or intensities than those with ASD only; © Jasmin Merdan/panthermedia.net

In a study of the co-occurrence of attention deficit hyperactivity disorder (ADHD) and autism spectrum disorder (ASD) in early school-age children (four to eight years old), researchers at the Kennedy Krieger Institute found that nearly one-third of children with ASD also have clinically significant ADHD symptoms.

The study also found that children with both ASD and ADHD are significantly more impaired on measures of cognitive, social and adaptive functioning compared to children with ASD only.

Distinct from existing research, the current study offers novel insights because most of the children entered the study as infants or toddlers, well before ADHD is typically diagnosed. Previous studies on the co-occurrence of ASD and ADHD are based on patients seeking care from clinics, making them biased towards having more multi-faceted or severe impairments. By recruiting patients as infants or toddlers, the likelihood of bias in the current study is significantly reduced.

"We are increasingly seeing that these two disorders co-occur and a greater understanding of how they relate to each other could ultimately improve outcomes and quality of life for this subset of children," says Rebecca Landa, senior study author and director of the Center for Autism and Related Disorders at Kennedy Krieger. "The recent change to the Diagnostic and Statistical Manual of Mental Disorders (DSM-5) to remove the prohibition of a dual diagnosis of autism and ADHD is an important step forward."

Participants in this prospective, longitudinal child development study included 162 children. Researchers divided the children into ASD and Non-ASD groups. The groups were further categorized by ADHD classification according to parent-reported symptoms of ADHD on the Hyperactivity and Attention Problems subscales of the Behavioral Assessment System for Children-Second Edition, a standard assessment specifically designed to identify the core symptoms of ADHD.

Results revealed that, out of 63 children with ASD in the study, 18 (29 percent) were rated by their parents as having clinically significant symptoms of ADHD. Importantly, the age range for children in the study (four to eight) represented a younger and narrower sample than has been previously reported in published literature. "We focused on young school-aged children because the earlier we can identify this subset of children, the earlier we can design specialized interventions," says Landa. "Tailored interventions may improve their outcomes, which tend to be significantly worse than those of peers with autism only."

Researchers also found that early school-age children with co-occurrence of ASD and ADHD were significantly more impaired than children with only ASD on measures of cognitive and social functioning, as well as in the ability to function in everyday situations. They were also more likely to have significant cognitive delays (61 versus 25 percent) and display more severe autism mannerisms, like stereotypic and repetitive behaviors. The study findings suggest that children with the combined presence of ADHD and ASD may need different treatment methods or intensities than those with ASD only in order to achieve better outcomes.

Landa and her team recognize that this research supports the need for future prospective, longitudinal studies of attention, social, communication and cognitive functioning from the time that the first red flags of ASD are identified. Such research will lead to important insights about the relative timing of onset and stability of disruption to attention mechanisms and barriers to successful functioning in children with co-occurring ASD and ADHD.

More about the Kennedy Krieger Institute at: www.kennedykrieger.org