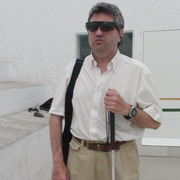 Testing the new system for the
blind; © RUVID

A team of engineers have developed a new device that helps the blind to move independently. This system is called EYE 21. It is an electronic tool that allows blind people to move autonomously in any environment.

The blind, thanks to a pair of sunglasses equipped with two micro cameras and headphones, are able to perceive an acoustic image of the space at which they point their new eyes. This tool has been developed as a continuation of the European project Casblip.

In its first version, the system recognizes shapes and replaces them with sounds positioned on the surface of the recognized forms. The two micro cameras analyse space, create a three-dimensional model of it and associate sound points to points on the surface that is being analysed. In this way a blind person can hear space, and their brain reconstructs its shape from that spatialised sound.

"We all have a natural ability to talk at the same time as we detect the position of coin that has just hit the ground. This ability to represent space with sounds without disturbing other activities of the brain is the basis of how this system works. Combining object recognition technology with sound representation of space allows a blind person to recreate those sounds and perceive their original shape", said Guillermo Peris.

According to this researcher from the Universitat Politècnica de València’s CITG, with this system, users will have a new sense of perception of 3D space, different from sight: "We still do not know its limitations, but we do know many of its possibilities." At the moment there are four prototypes of it, and ten new ones are intended to be put into operation in the coming weeks.