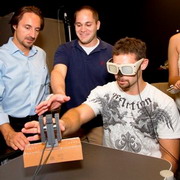 Research at Arizona State University (ASU) and Columbia University to better understand the intricate sensory and cognitive connections between the brain and the hands has won support from the National Science Foundation (NSF).

New discoveries about such connections could benefit people with neurological disorders such as Parkinson's disease and cerebral palsy, and those who need prosthetic hands.

Marco Santello and Andrew Gordon have worked together for several years in pursuit of deeper knowledge about interactions between sensory feedback and motor actions involved in control of the hand. In their current project they are seeking to determine the neural mechanisms that control learning and planning of the grasping and manipulation of objects.

They are examining the visual cues people use to assess object properties before they grasp or otherwise manipulate objects. In addition to using cues such as object shape or density, people often use memory of similar actions performed in the past. "We can pick up these cues, and we can predict the result of our actions on an object, but we do not know exactly how the brain does this," Santello says.

Santello's focus is on neural control of the hand and the workings of senses such as vision and touch. By manipulating these senses in people with normal brain, hand and muscle functions, Santello studies what causes the performance of an action that is easy under normal conditions to become difficult. This allows him to identify what impact a specific sense has on how the brain controls the hands.

In his experiments, he imposes sensory deficits on test subjects, using goggles to block vision at selected times during the manipulation to interfere with the subjects' abilities to learn and execute grasping tasks. "We want to understand what aspects of visual feedback help the brain to successfully control grasping of an object and store a memory representation of that action," he explains.

Gordon's does cerebral palsy research. His related collaborative work with Santello focuses on cognitive aspects of the interaction between the brain and the hands, assessing the information the brain gains and processes from sensing the shapes of objects and exploring the role of memory of past actions.

"It is important to discern the basic mechanisms of storing the memory of recently performed actions, of planning future actions and integrating sensory feedback in healthy individuals, so that we might be better able to understand and treat neurological or musculoskeletal disorders," Santello says.


- More about the Arizona State University at: www.asu.edu